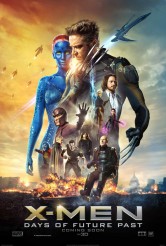 Action-packed, yet surprisingly warm and character-driven 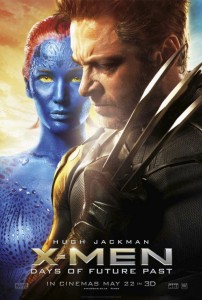 If you’re going to make an installment of a film franchise that potentially erases the continuity of previous endeavors, X-MEN: DAYS OF FUTURE PAST demonstrates how to do it with not only style but real urgency. Don’t just randomly drop time travelers into the continuity before our regular characters have fully formed, so that you can change the past and declare all that came before null and void. Instead, take a page from writer Simon Kinberg, who works from a story he crafted with Jane Goldman & Matthew Vaughn, and start with the characters we already know and love, then give them a crisis so huge that we understand why they’d want to risk their timeline to get out of it.

X-MEN: DAYS OF FUTURE PAST, which brings original X-MEN and X-MEN 2 director Bryan Singer back to the fold, begins with something so close to TERMINATOR that it appears to be just this side of the copyright border. Huge, manmade shape-shifting machines known as Sentinels are hunting and killing every mutant they can detect, along with anyone who even carries mutant genes. A few survivors, including Charles Xavier aka Professor X (Patrick Stewart), Erik Lehnsherr aka Magneto (Ian McKellen), Logan aka Wolverine (Hugh Jackman) and Kitty Pryde (Ellen Page), are holed up in an ancient fortress inChina, but it’s just a matter of time until they’re found. When everyone realizes that Kitty’s powers may be able to send someone back to the past to prevent the creation of the Sentinels, Charles seems the logical choice. However, the process is so dangerous that onlyLogan, with his powers of instant recuperation, can make the journey.

Logan’s task seems impossible. Not only must he find the younger selves of Charles (James McAvoy) and Erik (Michael Fassbender) – who in 1973 were completely estranged – and convince them of his mission, but they must all band together and persuade the shape-shifting, rebellious Mystique (Jennifer Lawrence) not to kill Sentinel inventor Bolivar Trask (Peter Dinklage).

Blessedly, the script doesn’t dwell too long on the “I’m from the future”/”No, you’re not” business. It’s dealt with once in sensible (for this universe) fashion, and we’re allowed to imagine the next few conversations.

The film faithfully incorporates both its immediate predecessor (X-MEN: FIRST CLASS) and the original trilogy, although – lack of any information to spoil alert – it looks like we’ll never get an explanation now about how Charles managed to re-corporealize himself at the end of X-MEN: THE LAST STAND. Otherwise, the time paradox works pretty well with what we know, except of course for the part about there being no Sentinel threat in the trilogy.

Fortunately, X-MEN: DAYS OF FUTURE PAST is much more than getting us from here to there within the story and the timeline, or even a set of thrilling, often hair-raising action sequences, though these are plentiful. The movie has honest soul, especially when it gives over to Charles in 1973 grappling with his demons. McAvoy gives a fully inhabited performance; his Charles isn’t just an avatar with superpowers, but a youngish man of his time and place, dealing with his failures and his needs, even as he grapples with his responsibilities. SinceLogan is allowed to be astonished and amused by many things he encounters, Jackman is allowed to play Logan often with a lighter touch here, which is great fun to witness.Lawrence plays obdurate, passionate Raven/Mystique with enormous conviction as someone trying to do the right thing with the weight of the world on her shoulders alone, as she sees it. Fassbender is excellent as the ever-calculating Erik and Dinklage is perfect as the villain of the piece who, like a number of other characters, sees his destructive ambitions as working for the greater good. Evan Peters, new to the series, is delightful as a new mutant who is called upon for aid. There are a number of uncredited cameos (plus one credited one) here that are immeasurably helpful in rounding out the narrative.

X-MEN: DAYS OF FUTURE PAST has a lot going for it, including the fact that one doesn’t need to be an expert on the mythology to get caught up quickly. However, its biggest assets are a sense of joy and a sense of wonder that allow the movie to linger in the mind after it ends.