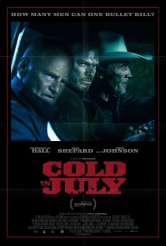 A thriller that gets its emphasis wrong

Adapted from a novel by Joe R. Lansdale, one can see the elements that should make COLD IN JULY a sharp thriller. It’s got a great cast, headed up by Michael C. Hall, Sam Shepard and Don Johnson, an intriguing premise and, in Jim Mickle, a director who wants to make sure that the scenes look interesting. So what’s the problem? Without having read the novel, it’s impossible to say whether certain key explanations have been discarded or if they simply weren’t there in the first place and the omissions weren’t rectified. Either way, we’re directed to expect answers we don’t get, then being told rather than shown what we ought to feel about the revelations that are provided.

We’re back in 1989, when everybody watched videotape and nobody had cell phones or personal computers. Richard Dane (Hall) is a happily married father of a little boy in an East Texas town. Richard is well-liked, has a picture framing business and never had any trouble with the law. When a masked intruder breaks into the Dane household at night, Richard shoots the man dead. We can see Richard is terrified and to the police, it’s a clear-cut case of self-defense, even though it turns out the burglar was unarmed.

However, when the burglar is identified as the son of recently released ex-convict Russell (Sam Shepard), Richard finds his life upended. Russell pays Richard a couple of visits and feels he’s owed payback, even though he hadn’t seen his son since the boy was a child. Richard winds up involved in a world he never knew existed.

This doesn’t go where we might be expecting, which is all to the good, but there are surely better, less coincidental ways for the story to reach its chosen route. There are also problems with emphasis. One character turns out not to be who we are led to believe he is, but – alert to lack of something to spoil – we never find out who he was or what he was doing there.

A bigger problem is the film’s emphasis. Far be it from this reviewer to complain about a film following actor Hall (albeit DEXTER fans may experience a bit of psychic whiplash at the Richard character’s squeamishness), but try as the filmmakers do, this is really Russell’s story, and we don’t get enough time or insight into him to become emotionally involved in his struggle. Shepard is tough and inscrutable most of the time here, a man’s man. This is the kind of role Clint Eastwood often played, except Eastwood (and his directors, when he wasn’t helming the piece) usually arranged to show us ways into the character’s heart and soul. Here, while we intellectually understand the dimensions of the dilemma, we don’t feel them at all.

Another problem is Richard’s involvement in the story past a certain point. It’s hard to describe the issue without being overly revealing, but it seems like Richard should ask for and receive information about exactly what was happening in one particular scene before proceeding; if he gets an answer none of us would like, he shouldn’t proceed at all.

Don Johnson is a highlight here as a flashy private investigator; the actor adds welcome energy and humor to the film.

Director Mickle takes pains to make the shots attractive and intriguing; this is noir awash in color and shading. COLD IN JULY is made with skill, acted with proficiency and has a story with unfulfilled potential.