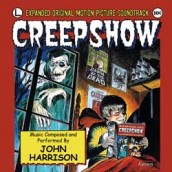 The crate finally gets opened on John Harrison's classic horror score, as well as that gloriously musty library music

From the time when the denizens of NIGHT OF THE LIVING DEAD shambled through its farmhouse field to the tune of creature feature stock music, George Romero’s horror films have had a pulp throwback feel to them that recalled the graphic, moral comeuppance of such E.C. comics as “Tales From the Crypt” and “Vault of Horror.” So it was only natural that the filmmaker would unleash his own cinematic, blood-colored anthology with 1982s CREEPSHOW, authored by no less than Stephen King. It’s a film that for many remains the director’s most unhinged and pleasurable effort, especially with its seamless combination of stock score and the throwback stylings of composer John Harrison, both of which immeasurably abetted the film’s tone of camp dread.

Most recognizable to Romero fans for having a screwdriver stuck into his head in DAWN OF THE DEAD, John Harrison went behind the scenes for Romero on CREEPSHOW, first as an assistant director, and then as the keyboard composer of note. But where synths were the horror scoring rage at the time, it was the ghoulishly fun dexterity of CREEPSHOW and its old-fashioned, “player piano” approach that made its music so strikingly unique, especially in their seamless joining with its eerie electronic vibrations. Each of the film’s five chapters would have distinctive themes that made for a gleefully morbid whole, with a wraparound story that set the tone with its memorable melody, haunted chorus and cackling laughter, all driven with Harrison’s energetically played ivories that effortlessly switch between the organic and synthetic.

Indeed, there’s a freshness, and energy to his acoustical approach that far more suggests an unhinged silent movie accompanist than someone trying to match the stylism of a 50s-era monster movie, an improv-like quality that really gets to shine on this La La Land disc that finally frees his music from the “suite” presentation that fans have heard in CREEPSHOW‘s many previous soundtrack editions, allowing each musical segment’s personality to come screaming forth. A comic, Baroque quality of the moldering rich inflects the pastry-crazed corpse of “Father’s Day,” while quivering synths take on a Theremin-like strangeness of green weeds taking over King’s white trash farmer in “The Lonesome Death of Jordy Verrill.” Far more serious is the way in which Harrison uses a steadily pounding piano and unnerving, wave-like synths to play the inexorable downing death engineered for the illicit lovers of “Something To Tide You Over.” Harrison uses the piano to dizzyingly effective montage effect in creating a dread-filled, classical sound and piercing creature call as two milquetoast professors are astonished to find a man (and bitch)-eating Yeti within “The Crate,” creating a feel of Hitchcockian suspense in a monster being used as a pawn for murder.

But it’s the cockroach infestation of “They’re Creeping Up On You” that brings out Harrison’s queasiest use of electronics, mimicking the disgust of the creatures that flood over a heartlessly rich slumlord, piercing effects that unnervingly build to a sonically skittering, gut-spilling climax that remains film scoring’s most unnerving embodiment of insect horror. It’s emblematic of Harrison’s distinctive voice as a composer (one that would get even crazier when applying a Calypso beat to Romero’s DAY OF THE DEAD before moving onto his own directing career with the likes of DUNE and LEVERAGE. This truly unleashed presentation of CREEPSHOW remains not only one of the 80s most fun horror soundtracks, but one that truly captured the feeling of comic book ghastliness with its mixture of old-fangled horror and now retro electronic eeriness.

Where Romero’s use of stock music went from NIGHT‘s budgetary necessity (as in no money for a new score) to being intrusive amidst Goblin’s work for DAWN OF THE DEAD (mandated by its Italian co-producer Dario Argento) CREEPSHOW allowed the director a pitch-perfect blend between the new and the old, namely scoring that was trying to sound antiquated alongside orchestral music that was purposefully cobwebbed in regards to the kind of melodramatic haminess that screamed 50s-era horror. Beyond the delightfully groovy disco tune “Don’t Let Go,” the inclusion of Ole George Music’s “library” tunes that helped make “Creepshow’s” soundtrack so memorable is another reason to celebrate this release. The harpsichords and poking brass of Ib Glinermann’s “Spy Fingers” and “Danger Tension,” along with the ghostly voice of Philip Green’s “Dramatic Eerie” and ominous strings of “Mystery Hour” are music at their most exclamatorily titled effect, and darn if you can’t shake the clammy feeling that you’ve heard this stuff on the TV on the creature features that defined your childhood, which is a testament to Romero’s good, campy taste in music. Along with the progressive synths of Roger Webb’s “Eternal Light,” Neil Amsterdam’s pokey “Vaudeville” and the pomp and circumstance of Gaudeaemus Igitur’s “Graduation Day” give spice to the chills. All seamlessly add up for an arch sensibility that blended perfectly with Harrison’s work for the glorious, four-colored grand guignol of CREEPSHOW – whose excellent booklet is supplemented by Jeff Bond’s chilling liner notes and humorously warm reminiscences by John Harrison and George Romero, ellucidating on their bloody good mutual admiration society.

Click on the link to Purchase the CREEPSHOW soundtrack