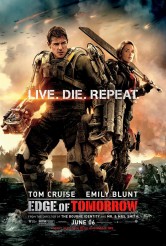 A strong premise and strong execution elevate this GROUNDHOG D-DAY

What if the premise of GROUNDHOG DAY – a man who wakes up to live the same day over and over – were applied to a science-fiction war drama? One answer to that question is provided effectively and mostly engrossingly by EDGE OF TOMORROW, the film adaptation of Hiroshi Sakurazaka’s novel ALL YOU NEED IS KILL. There’s a minor glitch toward the end – something that will occur to a lot of the audience that doesn’t occur to the characters – but to be fair, our heroes are beyond stressed out at that point. There are also the usual questions about time travel/alteration, but EDGE OF TOMORROW has one of the better answers/explanations so far provided in this science-fiction subgenre.

The Earth is in a war against an alien race known as the Mimics (although they don’t seem to mimic anything, so this designation is puzzling). Tom Cruise stars as U.S. Army Major Bill Cage, a media officer and unapologetic coward whose efforts to avoid having to be embedded with fighting troops the front line result in him being stripped of rank and sent out to fight himself. Cage tries everything in his power to escape, but he winds up in the midst of a ferocious battle, shoots an unusual-looking Mimic and then gets killed.

Imagine Cage’s surprise when he wakes up at the moment he arrives on the base. He again tries to get out of it, but is a little smarter about it this time – which still doesn’t save him. He does, however, encounter war hero Rita Vrataski (Emily Blunt), who managed to kill an extraordinary amount of Mimics in a previous battle. After Cage has died and resurrected enough times, he learns how Vratanski accomplished that feat, along with what’s happening to him and what he needs to do if humanity is going to have any chance of survival.

EDGE OF TOMORROW has got a lot going for it, starting with how it is that Cage keeps getting flung back to a certain point in time rather than simply leaving this life when he dies. Once we learn it, it seems so obvious that it’s surprising nobody’s come up with this before, so kudos to the writers (novelist Sakurazaka and screenwriters Christopher McQuarrie and Jez Butterworth & John Henry Butterworth) for making something new seem so familiar. On the flip side, we’re never bored with the resets, as things change quickly and at a certain point, the filmmakers trust us to fill in the blanks.

Cruise is another pleasure here. He has enormous enthusiasm for Cage’s arrogant, scaredy-cat phase, and moves him along into another sort of person at such an incremental pace that it seems organic rather than showy. Blunt is excellent as the tough, ever-determined Vratanski. Bill Paxton is a hoot as the commanding officer of Cage’s unit and Brendan Gleeson is very good as the head of the multi-national military force.

Director Doug Liman keeps everything moving at whirlwind speed, giving us a we-are-there perspective on the battles and deaths that are shocking, horrifying, tragic and sometimes funny by turns. The look of the various aliens is frightening and energetic.

There are a few apparent story glitches, but it’s hard to discuss these without getting into spoilerish detail. Mostly, the plot logic is sound.

EDGE OF TOMORROW is a solid military science-fiction adventure, with character progression and a bracing concept as underlying strengths.

Blu-ray Review: THE WOMAN IN BLACK
Exclusive Interview: Fran Kranz on THE LORD OF CATAN - PART 1
GRACEPOINT actor Kevin Rankin is one of many suspects on this BROADCHU...
TV Review: SUPERNATURAL – Season 11 – “Red Meat”