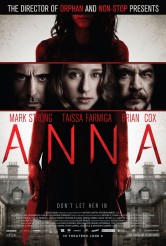 Remote viewing, discussed in newsreel footage early in ANNA, is a real technique developed by the military. There’s some dispute as to how much, or whether, it actually works, but there is documentation that the armed forces used psychics to try to mentally “see” terrain, buildings and rooms far from their physical selves. In ANNA, this technique has been enhanced, so that there are now entire agencies of “memory detectives,” investigators who can enter a person’s mind to find recollections of past events that may have been forgotten due to trauma or other causes. The technique is helpful in both therapy and legal cases, though in the latter, it takes a back seat to hard evidence.

John Washington (Mark Strong) is a memory detective whose career has suffered after his own memories became entangled with that of a client. However, John is now just about broke, so he approaches his old boss Sebastian (Brian Cox). It just so happens that Sebastian has a case for John – Anna (Taissa Farmiga), now sixteen, was a patient of Sebastian’s when she was a child. Her mother (Saskia Reeves) and stepfather (Richard Dillane) have lately contacted Sebastian in search of help, as Anna is refusing to eat. Perhaps John can use his skills to access Anna’s memories, find out why she’s starving herself and then get her back on the road to health.

Naturally, this is a lot more complicated than it sounds. Not only is Anna brilliant and easily able to anticipate what John may do and say, but there’s a history of bad things in her past. The question is whether Anna is perpetrator or victim.

Farmiga is a fascinating young actress, able to play moments so that she can be simultaneously sympathetic and menacing. Strong has enormous conviction and subtlety. The two of them immediately elevate all of their scenes on the basis of credible intensity, intelligence and charisma.

For a good while, ANNA keeps us guessing as to what’s actually going on here. Unfortunately, the answers don’t live up to the build-up. It’s not that explaining what a memory detective is and then almost immediately riffing on this is problematic – in fact, it’s kind of courageous, showing faith in the film’s created world – but rather that at a certain point, the riffing doesn’t go far enough. When it should blow our minds, ANNA sinks back into the conventional, suggesting that either somebody involved high up the power ladder lost his or her nerve, or else the creative team had a lot of good notions but not the big one to tie the rest together.

As long as it keeps us wondering, ANNA is a lively brain-teaser. When it starts providing revelations, it falls into ordinariness.