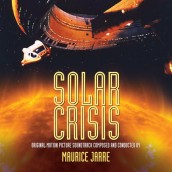 I may have been the only person to see this intended sci-fi epic on the big screen back in 1990, let alone enjoy the loony virtues of Alan Smithee’s (i.e. Richard Sarafian’s) voyage to bomb the sun, a mission pre-figuring SUNSHINE‘s by almost two decades. Powered with impressive effects by 2010’s Richard Edlund, this 50 million dollar Japanese-American co-production was filled with stars like Tim Matheson, Jack Palance, Peter Boyle and Charlton Heston (because you can never end the Earth without him).

But perhaps the most impressive passenger aboard SOLAR CRISIS was Maurice Jarre, who’s catch-all style score was especially well suited for an all-over-the-place story involving a beautiful test tube astronaut intergalactic espionage and Paul Williams as a talking computer. Unfortunately, SOLAR CRISIS ended up in a theatrical black hole in the States, essentially throwing Jarre’s impressive work into the void along with it. But thanks to Intrada, who’ve recently been putting out every relatively obscure work of the composer’s from PRANCER to DISTANT THUNDER, fans can enjoy this virtually unknown, yet sparkling highlight in Jarre’s career.

Jarre was especially active in the sci-fi landscape during the 80s as he veered between the sumptuously romantic orchestral scoring of THE BRIDE, the percussively ethnic post-apocalypse landscape lying within MAX MAX BEYOND THUNDERDOME and the unearthly synthesizers that created a DREAMSCAPE – let alone scores that combined all of these styles to a powerful, otherworldly effect like ENEMY MINE. A new decade’s start (which would also yield the alternately romantic and terrifying soundtracks to GHOST  and JACOB’S LADDER) made SOLAR CRISIS a powerful summation of Jarre’s best genre attributes. Always a composer at home in the desert, Jarre powerfully evokes the blasted environment of Earth with powerful brass, swirling action and exotic orchestrations, while keyboard percussion adds fuel to the incident-fraught spaceship racing to Earth’s salvation, music full of pounding, futuristic impact and metallic samples, buffeted by Jarre’s electronic solar winds. Yet some of CRISIS‘ most impactful moments revolve around the human sacrifice that makes for any disaster film worth its salt, as a mournful cello and steady heartbeats have an astronaut give his to save humanity. Finally, a “Carmina Burana”-esque chorus enters as to blow out the sun’s earth-killing spark, complete with what might be the most crescendos given to a climactic orchestral piece.

Where Jarre’s work, which was haphazardly cut about about the film and given an imperceptible mix to boot, his original musical intent is crisply restored here, with Jim Lochner doing an impressive job of describing the film’s crazy-quilt production. Now we can only hope that Intrada will release Jarre’s even more insane sci-fi score for SOLAR BABIES to complete the composer’s tributes to global warming.

Click on the link to Purchase the SOLAR CRISIS soundtrack