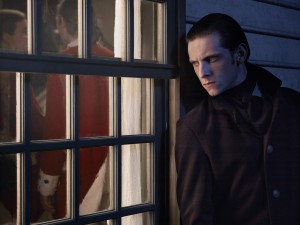 In TURN, based on Alexander Rose’s nonfiction book WASHINGTON’S SPIES, Jamie Bell stars as historical figure Abraham Woodhull. Abe is a cabbage farmer living in the American colonies in the eighteenth century when war breaks out. Abe initially wants to stay out of the conflict, but he’s recruited by his friend Ben Talmadge (Seth Numrich) to join the Culper Ring, a band of spies who answer to General George Washington. The AMC series has its first-season finale Sunday, June 8, at 9 PM.

AMC has presented a Q&A panel at the Pasadena Langham Huntington Hotel for the Television Critics Association for TURN. Actor Bell, a young Englishman who shot to fame as the lead in BILLY ELLIOT and had subsequently been in projects ranging from KING KONG to JUMPER to THE ADVENTURES OF TINTIN, is amenable to discussing TURN further.

ASSIGNMENT X: How much, if anything, did you know about this part of American history?

JAMIE BELL: Almost nothing. I mean, I knew that they won and we lost, but in terms of the Culper Ring, almost nothing. I thought [TURN showrunner and, with Barry Josephson, exec producer] Craig Silverstein’s script was good in the sense that he set them up as real people, set the period in a real time. It never felt like it was a period piece just to be a period piece. And also, all these guys who did this were real guys. Women as well, [including] Heather [Lind]’s character, Anna Strong. They’re all people risking a lot, so the show was an education for me.

AX: Did you think about, “If I found myself in Abraham Woodhull’s situation, what would I do? Would I tell them to screw off, would I go with the rebels, would I go back to my dad and say, ‘Guess what?’”

BELL: Yeah. Listen, I’m an Englishman, but I live in this country [theU.S.], so I can kind of understand his plight. If there was a force that came into this country and was saying things like, “We’re going to tax you on this, we’re going to govern you like this, you’re going to have all these curfews, you’re going to have people living in your house,” I wouldn’t be the first one to take up arms, I would kind of be in Abraham Woodhull’s situation. I’d be like, “I don’t really want a part of this. I know what I really believe in – I really believe that we shouldn’t be governed by a monarchy three thousand miles away. I want my own say in this.” But I wouldn’t be the first one to take up arms against the Empire. I’d have to think about it.

AX: Has there been anything on TURN that was particularly challenging to you?

BELL: It was something that was pretty fresh to the period, because we didn’t want the period to feel stale, but also so much about the period kind of informs the performance. You have to kind of lose your contemporary-ness and check it at the door and play into the eighteenth century. So that was a challenge. The accent was a challenge. Physically shooting it was a challenge, because it’s a big show, and we don’t have a lot of time to do it, and there are a lot of extras and a lot of unit moves and stuff like that, so the actual challenge of capturing it has been difficult. 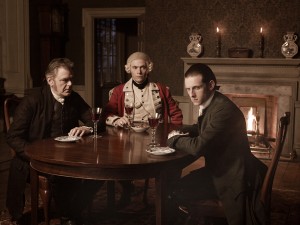 AX: It also looks like there’s a lot of working in mud.

BELL: Yeah. And cold. It’s freezing in Richmond [Virginia, where TURN is made]. So we’ve got a lot of elderly people and children in the supporting cast and stuff, so it’s difficult. It’s really difficult.

AX: Other than that, how are you enjoying your first foray into American series long-form television?

BELL: It’s great. I mean, to me, it’s where the pinnacle of storytelling is right now. I think movies are still a great experience, and going into a darkened theatre and sitting there together is an experience that will never be replicated, but I do believe that original storytelling is happening in television. Character development and opportunity for actors is in television for the most part. So I’m in a very privileged position, to be with a great network in an exciting new show. So I’m very privileged.

AX: Do you have any other projects that we should know about right now?

BELL: I actually got nominated for a Danish Oscar [the Bodil] because of my role in NYMPHOMANIAC: VOL. II, which is a Lars von Trier movie, so I’m in that movie, and then I’ve got FILTH coming out [the weekend of June 6] with James MacAvoy and then I have SNOWPIERCER with my friend Luke [Pasqualino], directed by Bong Joon-ho, the Korean filmmaker, with Tilda Swinton, Chris Evans and a bunch of other people, so there’s a lot going on.

AX: You do a lot of projects that are set in the past. Do you find that more challenging, or is that somehow just what’s coming over the transom?

BELL: I don’t even think it’s intentional. When I think about it, I really don’t particularly like period things. I never find myself watching period things. I much prefer things that are contemporary and relevant to today and now that are happening. But for some reason, I always find myself in a costume doing period dramas [laughs].

BELL: Right. Everything. I mean, there’s so much. JANE EYRE I did, this, NICHOLAS NICKLEBY – there’s so much that I’ve done that is not contemporary. I don’t know – it’s weird. I must have one of those faces.

AX: Is there anything else you’d like to say about TURN?

BELL: It’s the origin story of a spy ring that helped shift the country, helped turn the tide of war. I think for history buffs, the fact that this is kind of an untold story will be of big intrigue.

Related: Exclusive Interview with the makers of TURN