Home » Under The Skin soundtrack review 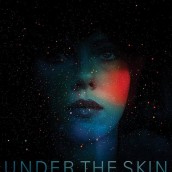 CD Review: UNDER THE SKIN soundtrack

There are WTF scores. And then there are WTF scores, soundtracks that take an approach so utterly bizarre and unique that their composers don’t seem to have originated from this planet. On that note, someone had better do a major physical examination of Mica Levi, a seemingly come-from-nowhere musician – at least if you aren’t aware of her alternative career in Micachu and The Shapes. But given this young, classically trained artist’s stunning, and startling scoring debut, you just might assume her place of origin is another star system. For how else to describe the sound mass that’s likely what stands for scoring, as heard through alien ears? More impressively, the fact that this experimentation somehow works as music for the extremely open-minded Terran listener is a tribute to one of the most original sci-fi scores, let alone film scores, to arrive on this planet in years.

While much “modern” classical music tends to be dissonantly shrieking sound masses whose pretentious point seems to be see how much a concert hall listener can be pushed before they start begging for some semblance of melody, UNDER THE SKIN is an excellent example of how extremely unconventional music is best first experienced within a motion picture – giving viewers a visual lifeline to then appreciate sad music on its own merits. There’s no doubt that the ghost of Krystof Penderecki, Gyorgy Ligety and their Avant garde ilk are hovering under the SKIN of Levi’s skittering, insect-like string effects or the heartbeat pulse that leads to an eerily sensuous motif, all before sinking into a ghastly void below. It’s hard to figure out just what kind of organic, or electronic instrumentation that Levi is using here, other than imagining his work being created by some nightmarish biomechanical orchestra.

But then, there’s no small inspiration given by the completely unsettling vision of director Jonathan Glazer, whose last (albeit terrible) theatrical film BIRTH created a similarly unique career-making score from Alexander Desplat. Yet the whole experience of “Under the Skin” doesn’t even seem like a movie as it does some documentary that follows a shapely alien about as she makes goo of her unlucky admirers, a filmmaking approach that demands something else than a typical horror sci-fi approach from its music. Levi certainly delivers an ultra-intellectual take on the shrieking, standard stuff, getting to the point of dissonant fingernails on a blackboard, yet pulling back just at the right moment. As one ventures through his SKIN, the score reveals itself as surprisingly motivic, the sharp, stabbing effects and piercing coos giving the idea of an extra-terrestrial trying to communicate its come-hither love cry in notes that were once music.

At times almost unbearably busy, and at others nearly devoid of sound, Levi’s unsettling, experimental work goes way beyond being strange for strangeness’ sake. It fits brilliantly as an approximation of a character struggling under a human’s skin, desperately trying to feel something – a “warming” process to experiencing actual love. Its emotion that Levi finally gives to the score, an eerily melodic approach that brings to mind the similarly, human-trapped (if far less lethal) visitor of “The Man Who Fell to Earth.” While that film’s brilliant musical collage still awaits release, UNDER THE SKIN comes across for lack of better description as the seductive love child between Penderecki and Brian Eno, signaling a major birth of talent in Mica Levi, who’s now been given license o be as bizarre as she wants to be. Indeed, hearing something remotely normal from him would almost be a bit of a let down after inhabiting the terrifying, tantalizing place he hears UNDER THE SKIN.

Click on the link to Purchase the UNDER THE SKIN soundtrack

Article Source: Assignment X
Article: CD Review of  the UNDER THE SKIN soundtrack