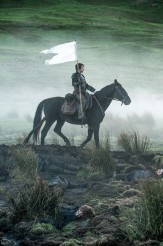 TV Review: GAME OF THRONES – Season 4 – “The Mountain and the Viper”

A great episode, and oh, the sorrow 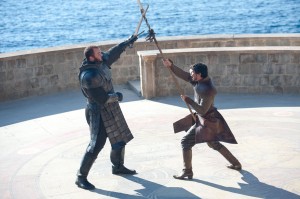 Hafþór Júlíus Björnsson, Pedro Pascal in GAME OF THRONES - Season 4 - "The Mountain and the Viper" | ©2014 HBO/Macall B. Polay

Even on GAME OF THRONES, truly great characters aren’t a coin a dozen, and so it is we mark with great sadness the passing of Oberyn Martell, played by Pedro Pascal, in “The Mountain and the Viper.” The Dornish prince, nicknamed “the Red Viper” for his fighting style, had great dialogue, wit, physical grace, kindness, understandable rage at the Lannisters and at their servant Gregor Clegane (Hafpor Julius Bjornsson) and offered to be Tyrion’s (Peter Dinklage) champion in trial by combat.

As Oberyn virtually dances around the huge, metal-clad Gregor, also known as “the Mountain,” he keeps insisting that Gregor confess to raping and murdering Oberyn’s sister Elia after killing her children. Oberyn, despite being smaller and not wearing a helmet and losing his weapon at one point, actually impales Gregor repeatedly. Unfortunately, Oberyn’s confidence gets the better of him and Gregor is able to pull him down and crush his skull before collapsing again. This bodes ill for Tyrion as well, as he is now deemed guilty of killing Joffrey (which we know he didn’t do) by the rules of trial by combat.

The fight is thrilling, Oberyn’s seeming victory is exalting and the outcome is absolutely tragic. Despite his relative newness, we’ve come to love Oberyn and we’re almost as devastated by his loss as his longtime mistress Ellaria (Indira Varma). We’re also really worried about Tyrion, but we’ll have to wait to find out what happens after sentencing.

In other news, Ramsay Snow’s (Iwan Rheon) plot to capture Moat Cailin works. Theon Greyjoy (Alfie Allen), who thinks he’s really Reek, “pretends” to be Theon so that the Ironborn holding Moat Cailin will give up to him. Naturally, Ramsay goes back on what he’s had Theon promise and flays all of the Ironborn alive. Ramsay’s father Roose Bolton (Michael McElhatton) is proud of his son and gives him theBoltonname. Roose is Warden of the North, the biggest of the Seven Kingdoms, so this carries a lot of power. We can but hope that this comes back to bite Roose in the behind. It’s a tough competition, but Ramsay – a sadist, liar and kiss-ass – looks like he’s got a lock on the Joffrey Baratheon Memorial Most Awful Person in Westeros Award. Rheon plays him beautifully. As for Allen, he does a great job with the tortured Theon, who we’d feel even more for if we didn’t remember so vividly what a swine he was when he could command men.

In the Vale, Petyr Baelish (Aidan Gillen) asserts that his new wife Lysa committed suicide to a council of the local nobles. Sansa (Sophie Turner) is brought in to testify against Baelish’s wishes. Although Baelish claims Sansa is his relative, Sansa tells the council her true identity, apologizes to Baelish and then reveals “the truth” – which is that Baelish rescued her from King’s Landing (true), that Lysa was jealous (true), that Baelish told Lysa that she was the only woman he’d ever loved (er, no, he said that her sister, Sansa’s mother, was the only woman he’d ever loved) and that Lysa committed suicide (rather than being pushed by Baelish). Sansa’s story is accepted. When Baelish asks later why she lied for him, Sansa says she had fears for her own safety if he were to be executed. Turner and Gillen continue to give powerful performances and Sansa and Baelish remain consistently intriguing individuals.

Sansa’s little sister Arya (Maisie Williams) and her traveling companion Sandor Clegane (Rory McCann) make it to the gates of the Vale, where they are told that Arya’s aunt died. Arya just laughs. At this point, we can’t blame her – poor kid turns up everywhere too late. Clearly, the gate guards don’t know about Sansa, so that’s another reunion that’s not going to happen. Arya also expresses sadness about Joffrey’s death – not only didn’t she get to kill him, she didn’t even get to watch. We also learn that what makes her happiest these days is when she gets to kill people she hates. We can’t blame her, but it’s on the dark side.

By the Wall, the Wildlings overrun Molestown, killing most of the inhabitants, though Ygritte (Rose Leslie) takes pity on Gilly (Hannah Murray) with her babe in arms and leaves them safe in their hiding place. At Castle Black, Sam (John Bradley) is wretched that he sent Gilly to Molestown – his friends console him that with everything Gilly has survived so far, she may have survived this (good point). How the Night’s Watch, with a hundred and five men versus about a hundred thousand Wildlings, can survive the coming battle is another question.

Over in Meereen, Grey Worm (Jacob Anderson) watches Missendei (Nathalie Emmanuel) bathing. He later tries to apologize, but she says she’s glad he did. This looks like the start of an interesting but complicated romantic relationship, as Grey Worm was castrated as a child.

A child brings a scroll to Daenerys’ (Emilia Clarke) counselor Ser Barristan (Ian McElhennie). The scroll is a pardon from the late King Robert Baratheon for Daenerys’ other Westeros counselor, Ser Jorah (Iain Glen). Barristan confronts Jorah, then brings him to Daenerys. Jorah initially was spying on Daenerys and sending reports to Lord Varys. Daenerys, furious and feeling deeply betrayed, banishes Jorah on pain of death.

Glen makes us really feel for Jorah, who is truly heartbroken by this turn of events. He loves Daenerys and now wouldn’t betray her for the world. We know this, but of course Daenerys, who has been royally messed about by quite a few people, is livid.

This is so much to take in, with so many traumas – Oberyn’s death, Tyrion’s conviction, Ramsay’s elevation, Jorah’s banishment – that it’s enough to make a viewer weep. And applaud, because GAME OF THRONES has us by the throat in an iron grip and shows no signs of letting go or letting up.