TV Review: GAME OF THRONES – Season 4 – “The Watchers on the Wall” 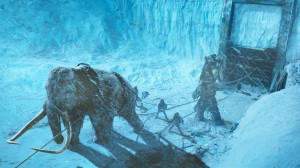 Breaking format with other episodes of GAME OF THRONES, the episode “The Watches on the Wall” takes place entirely in and around Castle Black as the Wildlings attack the Night’s Watch stronghold. If it’s medieval battle you want, feast your eyes, because the episode is filled with it, edge to edge. In true GAME OF THRONES fashion, of course, room is found for love, philosophy, humor and surprises, along with bloodshed, tragedy and lots of action.

We expect a Night’s Watch episode to focus on Jon Snow (Kit Harington), and he features here heavily, but the true star here is arguably John Bradley’s Sam. Sam gets to be heroic, romantic and even a bit wise without ever losing the quality of slight hesitation that marks him as someone who has been emotionally beaten down too many times.

The faction of Mance Rayder’s Wildling army led by Tormund Giantsbane (Kristofer Hivju) attacks Castle Black. We can tell things are truly dire by the fact that Ser Alliser (Owen Teale) concedes to Jon that Jon was right – they should have blocked the tunnel. Ser Alliser, who has previously been a sour jerk, shows that he is indeed capable of leadership, giving a rousing speech to the men of the Watch.

Sam is still castigating himself for sending Gilly (Hannah Murray) and her baby (named Sam after Hannah’s hero, though Sam doesn’t yet understand she sees him that way). Sam believes he’s going to die unkissed (to say nothing of being a virgin), tries to get some information from Jon on what it’s like to be with a woman. He then goes to the library to try to read up on it, where he’s discovered by Maester Aemon (Peter Vaughan), who talks with Sam about lost love, then admonishes Sam to go out and fight.

It turns out that Sam’s love isn’t lost – in fact, she’s at the Castle Black gates, where Sam overrides the young man on watch, lets Gilly in and swears that from now on, he goes wherever she goes. He then promptly puts her and baby Sam in the castle larder so they’ll be safe during the battle. Gilly wants Sam to stay with her, but he tries to explain how, despite his promise, he must be loyal to his brothers on the Watch. Later, he kisses Gilly, to their mutual joy (and the audience’s, too).

Sam also has a lovely scene with his friend Pyp (Josef Altin), who asks how Sam can possibly be afraid now, since he killed a White Walker. Sam explains that at that moment, he didn’t feel an identity as a brother of the Watch, as his father’s son – he was nothing. He’s afraid now because he’s no longer nothing.

The battle is ferocious, devastating and brilliant. Ygritte (Rose Leslie) shoots Pyp, who dies in Sam’s arms. Sam acquits himself well in battle, killing the Thenn Warg. The gate is defended successfully from a giant, at high cost, including Grenn (Mark Stanley). Jon has Sam let Ghost out of his prison, and the direwolf gladly joins the fray, biting off entire Wildling faces. Ser Alliser, gravely and probably fatally wounded, shouts encouragement to the Watch as his men drag him out of the melee.

And then there’s Jon, who fights brilliantly, kills the hateful Thenn leader. Ygritte gets the drop on Jon while he’s battling the Thenn but holds her fire. She then aims her bow at Jon again. Jon sees her. He is empty-handed and anguished. Ygritte holds her arrow, maintains her aim – and then is shot from behind by Olly (Brennock O’Connor), a boy who came to the Watch after the people of his village, including his parents, were slaughtered by the Wildlings. Jon can’t blame Olly, but cradles Ygritte in his arms as she is dying. She tells Jon they should never have left the cave where they were together. He tells her they’ll go back there. Ygritte’s last words are (what else?), “You know nothing, Jon Snow.”

The Night’s Watch triumphs over seemingly impossible odds. However, since the Wildlings will clearly attack again, and they still have far greater numbers, Jon believes the only way to defeat them is by getting to Mance Rayder. Mance united all the warring Wildling tribes – without him, they’ll go back to fighting each other. Sam thinks this is a terrible plan. Jon agrees, but it’s the only one they’ve got, so he goes off alone to try to find Mance.

A mild quibble here – why doesn’t Jon take Snow with him when he sets out north of the Wall? Perhaps it’s that Jon, a Warg himself, wants Ghost to be his eyes at Castle Black while he’s gone, but if so, it would be better if this was mentioned.

Otherwise, “The Watchers on the Wall” moves with speed and power. There are stunning battle moments, such as when the Watch deploys the Scythe. This is actually a gigantic scythe, the size of a house, which can and does slice an entire layer of ice off the Wall – very useful (and bloody) in getting rid of invaders who are trying to climb up to attack. It looks even more awesome and merciless than it sounds.

The ending between Jon and Ygritte seems the perfect cap to their tragic love story. As for Sam coming into his own, it’s great to watch and Bradley plays every bit of it truthfully and without overt flourishes.

We’re so used to GAME OF THRONES jumping us hither, thither and yonder that having so much of one segment of it just makes us want more of everything. It’s an especially painful desire when the season finale comes next. (You structured it this way on purpose, you sadists.) In any event, “The Watches on the Wall” demonstrates (if more proof were needed) that GAME OF THRONES is capable of being enthralling at any length.