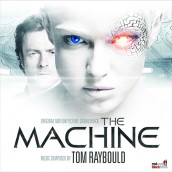 Among the wave of big-budget sci-fi scores using the latest in music high-tech to capture a lo-fi mid-80s electric sound, THE MACHINE resurrects the ghost in the synth to notable effect. Making his feature debut after numerous shorts (one tellingly titled THE BRITISH UFO FILES), Tom Raybould nails a hybrid approach between the coldly determined rhythms of John Carpenter, the more ominous sonic masses of Vangelis and the organic tonalities of a gentle, and just as effective piano and guitar. Put these together, and you’ve got an impressive recipe for creating musical artificial intelligence with a heart.

Such is the beautiful, but deadly robot conjured within an underground base for this well-reviewed genre film, a story whose isolation, moral dilemma and bouts of action is made all the more atmospheric by Raybould’s mesmerizing score. While there aren’t overarching themes as such, Raybould knows the tricks of his forbearers, make each selection its own musical entity, the score swinging between humanity and killing machine to create equal parts tension and empathy. It’s a score construct of continual rhythmic and ethereal interest that goes beyond its retro-perfection to find a chillingly unique voice that refreshingly retrofits old, potentially cheesy synth parts into a sensual score, a cool blast from past sci-fi score constructs that you can’t take your ears off of.

Click on the link to Purchase THE MACHINE soundtrack