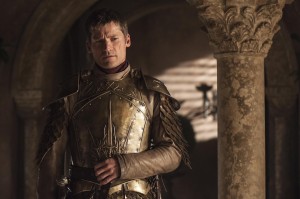 Peter Dinklage’s performance as Tyrion Lannister has been a thing of brilliance since GAME OF THRONES began, but he’s got a courtroom scene in “The Laws of Gods and Men” that practically sets the show on fire. Of course, GAME OF THRONES is the sort of show where this is far from the only highlight of the episode, albeit it’s the crowning glory.

In Meereen, Daenerys (Emilia Clarke) is starting to have a few small problems that, given the way of things, will likely grow larger. Her dragons are starting to attack herd animals, meaning that Daenerys must reimburse the destitute farmers. Daenerys also receives a visit from Meereen noble Hizdahr zo Loraq (Joel Fry), son of one of the crucified slavers. Hizdahr wants the slavers buried with honor, claiming his father was against the crucifixions of slave children that prompted Daenerys’ bloody vengeance. Daenerys compromises and allows Hizdahr to bury his own father.

Stannis Baratheon (Stephen Dillane), accompanied by loyal Sir Davos (Liam Cunningham), goes to the Iron Bank of Braavos for money that will allow him to wage war on the Lannisters. When Stannis pleads his own case, he gets nowhere, but Davos explains eloquently why Stannis is the only person with a claim to the Iron Throne likely to be able to hold it, given that Tywin Lannister (Charles Dance) is very old and King Tommen (Dean-Charles Chapman) is rumored to be the product of incest rather than the actual son of the late King Robert. The bankers are convinced. Mark Gatiss (yes, Mycroft on SHERLOCK) is vastly entertaining as the ever-urbane chief banker.

Yara Greyjoy (Gemma Whelan) mounts a raid to rescue her brother Theon (Alfie Allen) from the clutches of Ramsay Snow (Iwan Rheon). The trouble is that Theon is now so brainwashed that he refuses to leave the dungeons, and in the end, Yara and her now-smaller party must flee without him. The whole business gives Ramsay an idea, however – if he can get Theon to pretend to be his old self, Ramsay may be able to use him to capture a Greyjoy stronghold.

Tyrion’s trial is going about how we – and he – expect, with a parade of half-truths and outright lies uttered against him. Even Lord Varys (Conleth Hill), who has said that Kings Landing would have been lost without Tyrion’s strategies in the battle against Stannis’ men, speaks against him. Jaime (Nicolaj Coster-Waldau) privately makes a deal to save his brother with Tywin. If Tywin will end the trial, Jaime will agree to resume his role as Tywin’s heir and carry on the family line. Tywin promptly offers a deal – Tyrion will no doubt be found guilty, but Jaime can tell him to plead for mercy and Tywin will send his younger son to Castle Black to join the Night’s Watch. Jaime tells Tyrion and Tyrion consents to the plan.

And so, we think, this will be interesting – Tyrion at the Wall, coping with all the plots and the war against the wildlings and so on. Well, that’s a story to be imagined in fannish minds, because the deal is blown all to hell when Tyrion’s former lover Shae (Sibel Kekilli) takes the stand. Whether she’s driven by fear, hurt pride, threats or who knows what, Shae insists that she heard Tyrion and his now-absent wife Sansa (Sophie Turner) conspiring to murder King Joffrey. She also lies and says that Tyrion took her by force and ordered her to call him “her lion of Lannister,” an endearment that Shae invented.

Tyrion absolutely loses it, saying he didn’t kill Joffrey but wishes he had, that he’s actually on trial for being a dwarf and finally demands the right of trial by combat.

The dialogue Tyrion has in this scene is great, but what puts the sequence over the top are Dinklage’s unspoken reactions: hurt, dread, anguish, realization and finally fury of Shakespearean proportions.

But there are terrific moments everywhere. A scene between Lord Varys (Conleth Hill) – how we’ve missed you, sir! – and Prince Oberyn (Pedro Pascal) is enthralling in its nuance and portent. The material with Yara, Theon and Ramsay, with its reversals and revelations, is marvelously suspense and surprising (even for those who’ve read the books, there’s a prickle of alarm when Ramsay announces his schemes). The deal between Tywin and Jaime is coolly economical on its surface and boiling with emotion beneath.

Gatiss’ banker is a delicious surprise. Although there doesn’t seem to be any immediate way to engineer it, a scene between him and Hill’s Varys seems like a great idea. With what is here, there are so many wheels turning, with each movement a thing of beauty, that all one can really do is marvel at the grandeur of THRONES on every level. When it is at its best, as it is in “The Laws of Gods and Men,” there’s little that approaches its heights and nothing else like it.