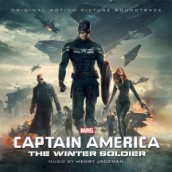 Where most Marvel movie scores have been sure to couch their metal musical exosuits in warmly approachable orchestral flesh, CAPTAIN AMERICA: THE WINTER SOLDIER is the first comic book score from the studio to truly do a Terminator number on its listeners for a significant chunk of time, going for hammering, stripped-down percussion and nail-on-chalkboard effects, a cold, troubling sound even crazier than the kind of ultra-beat scoring you’d normally get for scores featuring such assassin-turned-heroes as Jason Bourne. However, we’re talking about a hero-turned-assassin in THE WINTER SOLDIER, which is more than justification for Henry Jackman to come up with a score that’s overall far removed from the symphonically nostalgic glow that Alan Silvestri gave to the Cap’s enjoyably goofy initial adventure. Going for a real-world espionage approach (or as much as one can get in a comic book movie), the first Avenger’s latest adventure is a major cinematic improvement with a score that makes absolute, uncompromisingly suspenseful sense given the circumstances. For those willing to get with this new school action approach, THE WINTER SOLDIER is a pretty great score that embodies the blue-eyed representative of mom and apple pie getting thrown into a world where the simple morality of good versus evil has gone Hydra’s way.

THE WINTER SOLDIER marks Henry Jackman’s second issue in the Marvel universe after this terrific, more mainstream superhero score for X-MEN FIRST CLASS. But if this CAPTAIN  has two ancestors in the composer’s repertoire, then it’s the steely action of the underappreciated G.I. JOE RETALIATION and the terrifying adrenalin beat of CAPTAIN PHILLIPS Though Jackman brings in a noble, patriotic orchestra at the start with a trip to “The Smithsonian,” along with more typical fusions of orchestral excitement and action-pop percussion (“Project Insight”), he really lets out the WTF whoopass in the pulsating, near melody free car chase of “Fury” before the minimal, screaming, cyborg-ish introduction of THE WINTER SOLDIER, dehumanizing music as strange and threatening as anything in Hans Zimmer’s THE DARK KNIGHT.

It’s at this point that more typical superhero score fans are going to bolt, or stand up at attention. It’s the sheer mercilessness of this stuff that makes the music actually threatening, with the kind of icy, killer sample-driven beats that give THE WINTER SOLDIER a razor’s edge in Marvel’s cinematic universe. Jackman’s score veers well between this balance of musical flesh and blood with a merciless, Nine Inch Nails sound, using strings to get across Steve Roger’s betrayal, as well as his inexhaustible hope as he’s thrown against purposefully ugly, industrial suspense. Oftentimes the music barely seems to be doing anything with a few pulses and an electronic voice, which only ratchets up the “realistic” stakes as it were. Yet THE WINTER SOLDIER is as powerful in its construction as its killer Bucky, rhythmically slamming together orchestral, electronic and industrial elements to exhilarating chase effect (“The Causeway”), and even the proud, symphonic reaffirmation that this is a superhero score after all (“Time To Suit Up”). And as with his X-MEN score that breathlessly came to a military countdown Cuban Missile crisis, Jackman creates a terrifically rhythmic climax for “Winter Soldier,” even bringing in a Bond-like theme for The Falcon to create an exhilarating, all-out flying slugfest between melody and atonality (“Into the Fray,” “Countdown”). That we end with a proud, if darkly patriotic flag-waving theme for “Captain America” that’s possessed of both sampled, and orchestral qualities says much about how well Jackman has helped place Marvel’s most potentially innocent Avenger into a dangerous new percussive-rock world, one he’s here to stay in. Given how gripping Jackman makes it, there’s no reason to fight the musical future of superhero scoring.

Intrada once again gives physical CD muscle to Marvel (let alone Disney) with a generous 75-minute presentation of WINTER SOLDIER capped off with the big band standard “It’s Been a Long, Long Time” of Henry James & His Orchestra (which plays most effectively in shielding a wounded Nick Fury in Steve Roger’s pad) and Marvin Gaye’s funk noir “Trouble Man” title song, embodying The Falcon’s cool taste in listening as the tune that sums up everything Rogers needs to know about undercover cool in our current, conspiracy-crazed times.

Click on the link to Purchase the CAPTAIN AMERICA: THE WINTER SOLDIER soundtrack