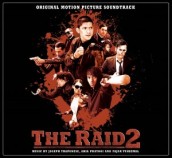 While its exhausting running time and sadistic body count certainly isn’t expanded on to THE RAID 2‘s benefit, one returning factor that this sequel makes bigger, better and more bad-ass is the in the punishingly exciting score by Joseph Trapanese and two composers given their shot at redemption.Teamed with Linkin Park’s Mike Shinoda for the first apartment-by-apartment Armageddon of  THE RAID Trapanese is now accompanied by Aria Prayogi and Fajar Yuskemai – the Indonesian dudes who actually scored REDEMPTION before Trapanese and Shinoda kicked them to the curb. But there’s anything but hard feelings here beyond meting out even more effective punishment. With the movie’s setting opened way mowing down drug lords to the city’s crime gangs, the tone turns from 80s-style synth salutes to something far nastier and modern, scoring akin to the growl before the berserker rage takes the amplification to 11. It’s palpably dark and powerful stuff that seethes with menace, with barely any niceties like human emotion to power it along – which are the charm for fans of these movies’ brutally kinetic appeal.

There’s almost a trance-like appeal to the merciless energy that these take-no-prisoners musical cops put into THE RAID 2, at times expanding on their unplugged anger with rock and techno elements, with the standout, ever-accelerating “Motor Chase” recalling Trapanese’s terrific drone chase from OBLIVION. Cooler yet is the sense of the mythic at play in accommodating filmmaker Gareth Edwards’ reach for John Woo-like greatness in the film’s bloody betrayals and lethally fated bromance. Though often minimal in its brute rhythmic force, Trapanese, Prayogi and Yuskemai make their sometimes-ethnic beat approach far more interesting than other action composers who might let their rhythm library have at it as they take a coffee break. Sure this trio isn’t insane enough to try to hit every move of the light speed action, but their relentlessly intense tone impresses even more in showing percussion as a blunt force instrument.

After so much exhilarating underscore punishment, perhaps the biggest kick in the head is to end the album with Arti Dewi delivering a 40s-style torch song (complete with sultry sax) with “Hush.” But then considering that ONLY GOD FORGIVES ended with the equally wacky song choice of “You’re My Dream,” perhaps there’s something going on with Asian ultra violence operas giving way to of tuneful retro irony.

Click on the link to Purchase the RAID 2 soundtrack