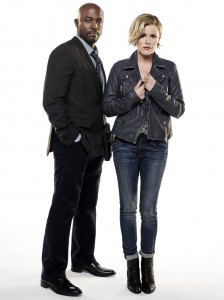 In TNT’s MURDER IN THE FIRST, premiering Monday June 9, Taye Diggs plays San Francisco police detective Terry English, who suffers a terrible loss in the first episode. Terry tries to overcome his emotions as he and his partner Hildy Mulligan, played by Kathleen Robertson, investigate a pair of murders, one of which involves a very rich, very smart entrepreneur (Tom Felton) who may have killed his employee.

MURDER IN THE FIRST is Diggs’ return to starring as a series regular after he wrapped six seasons as Dr. Sam Bennett on PRIVATE PRACTICE last year. He previously series leads in the science-fiction detective drama DAY BREAK and the single father dramedy KEVIN HILL. The New York-born Diggs also has a substantial stage career and recreated his role in the musical RENT for the feature film version.

Diggs is at TNT’s panel for the Television Critics Association for MURDER IN THE FIRST, created by Steven Bochco. When the panel ends, there’s a reception in the foyer, where Diggs is available for follow-up discussion. He mentions he’s adjusting to being back inLos Angeles. “It’s warm under those lights [on the stage for the Q&A]. I’m still not used to this weather.”

ASSIGNMENT X: What drew you to this character? Was it the detective aspect, the sense or loss, or Steven Bochco?

TAYE DIGGS: The writing and Bochco. If it had been about a plumber, and the writing drew me in the same way, I probably would have played the plumber, but I didn’t find a lot of scripts that spoke to me this season, and this is one of the ones that did.

AX: You’ve played a police detective before in DAY BREAK. Is there anything new you had to learn to play a detective this time around?

DIGGS: I’m an actor. I have a very short-term memory, so I had to relearn everything. That’s one of the fun aspects of taking on a new character, is to go to cop camp and I took some time in relearning how to load and fire a gun, I went to the shooting range, cuffs, all of that. We took kind of a refresher course. It was fun.

AX: Ian Anthony Dale plays one of your fellow detectives in MURDER IN THE FIRST. The two of you previously played partners in DAY BREAK.

DIGGS: Yeah, we’ve had the same manager for a long time.

AX: Were you instrumental in having him on this show, or is that coincidental?

DIGGS: He’s ridiculously talented and even better-looking. He got the role on his own.

AX: It looks like at least some of MURDER IN THE FIRST is shot on location in San Francisco …

DIGGS: We shot mostly exteriors inSan Francisco. It’s a beautiful city. I think we’re going to shoot there a couple of days out of every episode, and that’s a perk.

AX: So you’re commuting back and forth from Los Angeles to shoot there?

DIGGS: Right. Bochco was kind enough to take a few of us cast members toSan Francisco and we went to the police station there and had some great conversations with some of the inspectors and wonderful workers. They were gracious enough to share bits and pieces of their lives and experiences, so that proved to be quite useful.

AX: With Terry English, I don’t know what the timeframe of the first season is, but certainly in the first few episodes, he’s dealing with very fresh grief.

AX: Is it hard to stay in that mindset?

DIGGS: No, no. Luckily, just the way the medium is designed, you have breaks every time the cameras move. So for me, I definitely take advantage of those breaks and it kind of gives me time to breathe and maybe recalibrate if I need to gather myself, so it’s okay.

AX: So you can turn off the emotion when they call “Cut”?

DIGGS: Yeah. I’m one of those actors. Yeah, I can. [laughs] I’m not stable enough to stay in an emotional place like that. I’ve got to come out and return.

AX: Obviously, you’ve played opposite women as work partners before, but how is it playing opposite a woman as a police partner?

DIGGS: Oh, it’s great. And especially the dynamic that is in the writing, because Kath [Robertson] is a tour de force, and we get along off-screen, which helps the chemistry onscreen. I love how, as attractive as she is, the writers are not writing to any sexual tension right away. So that’s always fun. Some of the other writers were talking about the anti-cliches. It’s always fun to be a part of something different.

AX: Is there anything else you’d like to say about MURDER IN THE FIRST right now?

DIGGS: I’m just excited – I’m excited to be doing it; I’m excited for audiences to see me doing something a little different, and it’s fun to get back to work again.

Movie Review: THE ADJUSTMENT BUREAU
Blu-ray and DVD picks of the week including MONEYBALL
CD Review: THE LITTLE MERMAID: THE LEGACY COLLECTION soundtrack
TV Review: SUPERNATURAL – Season 13 – “The Scorpion and the Frog”