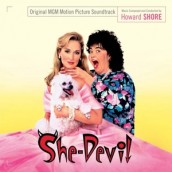 Could Howard Shore be a comic composer in serious disguise?

Before Howard Shore became the thunderous orchestral king of serial killers, fantasy epics and heavy duty drama, the Canadian composer (and former SNL music director) did indeed have a funny bone to his body early in his Hollywood career, as can be evidenced by AFTER HOURS, BIG and even MOVING.  Sure these scores might have been sandwiched between the Cronenbergian likes of THE BROOD and THE FLY, but humor has always provided Shore with some of his most purely enjoyable scores, especially when taking on the harlot-housefrau battle between Meryl Streep and Roseanne Barr in 1989s SHE-DEVIL.

DESPERATELY SEEKING SUSAN director Susan Seidelman helmed this cat fight that likely sounded better on paper than it played in forced execution, but the right, over-the-top notes were certainly hit by Shore in this delightful score that’s finally getting its day in the sun from France’s Music Box Records. Consider this score the warm up to 1994s ED WOOD as Shore uses his orchestra to go for hilariously overwrought emotion and retro kitsch, complete with cooing Esquival-esque singers. Like the horror score of a woman scorned, Shore contrasts “Night on Bald Mountain”-esque wrath with romantic melodies so grandiose that they’d send Alfred Newman running for cover – which is dead-on for conveying the attraction of Streep’s Harlequin superstar writer, whose ultra-feminine wiles steal away Barre’s husband. Shore’s score is the embodiment of this playful devilishness, chronicling the blonde man-eater and her black-haired righteous payback with lurking harps, sinister strings and growingly psychotic violins – all driven by a playfully antic theme that towers right up there with Mount Doom in Shore’s repertoire.

SHE-DEVIL also stands very well in the company of John Williams’ WITCHES OF EASTWICK as a playfully hellzapoppin showcase in how to use the immediately identifiable music of Old Scratch in energetically capturing the suburban destruction wrought by heartbreak. You can certainly hear the delight that Shore had in taking the intensity of bug men, killer kids and perverted twins he was dealing with at the time and giving their intensity a melodically rollicking dose of overwrought laughing gas for this wonderfully seditious score that stews the cauldron of righteous payback.

Click on the link to Purchase the SHE-DEVIL soundtrack