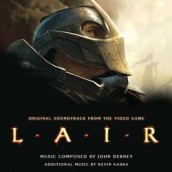 2007’s LAIR stands as a videogame that simultaneously allowed the booming industry to take off and crash to the ground. The big downdraft came from a “Sxixaxis” PS3 control system that was supposed to allow you fly giant lizards with the ease of a dragon rider from Pern. However, it ended up being so frustratingly faulty that thousands of users let fly their controllers towards their television screens (mine included). While players would have to wait for an analog update to truly enjoy the game’s graphic virtues, the one area that immediately met LAIR‘s grand ambitions, and then some, was in its truly amazing score by John Debney, which showed how the genre could truly fly with the kind of symphonic force given to a Hollywood blockbuster – in this case music with all of the grandeur of John Williams.

Consider the thrilling, massively symphonic twists and turns of LAIR as the score to a STAR WARS or INDIANA JONES movie that never was, and you’ll get an idea of just how well Debney assumed that maestro’s style in capturing the thrill of a trained dragon under one’s saddle. No Scottish bagpipes here, but incredibly thematic score that weaved the thrill of flying with the adventure of epic battle. “Lair” deliberately had a feeling of pure, big screen adventure – as harnessed for a past time seeking to capture a young multiplex audience. John Debney has certainly done massively fantastical scores, in particular CUTTHROAT ISLAND, THE SCORPION KING, ZATHURA and IRON MAN 2. But it’s the sheer exuberance of “Lair” that’s made this a standout for any entertainment medium as its soundtrack is supercharged with the enthusiasm of a composer being given a game-changing opportunity to show the industry that what many viewed as kid’s stuff could hold this kind of bold musical power. The melodies of LAIR sing with the noble goodness versus militaristic evil, as soaringly performed by a 90-piece army of orchestral players at Abbey Road studios in London. While their exhilarating symphonic approach could take place in any time period involving a bullwhip or light saber, Debney and additional composer Kevin Kaska (a frequent orchestrator for the musician) also give this epic work an exotic touch, with age-old ethnic instruments, and Lisbeth Scott’s evocative vocals distinctly placing the soundtrack in a sword and sorcery realm. But whether you experienced LAIR‘s score through a console or not, its musical storytelling that lets us imagine a knight and his dragon pitted against overwhelming odds, delivering one fire-blasting action cue after the other to show that game scoring was worthy of this kind of musical scope.

Where LAIR has been available as a downloadable score since the game’s release, La La Land now unleashes Debney’s masterwork in the physical format it deserves, showing off the score’s majesty across two CD’s. A glossy booklet highlights the game’s beautiful art design, with Jeff Bond’s liner notes giving LAIR its well-deserved place in the major evolution of video game scoring, one that showed how top Hollywood talent would be eager to bring all their big screen might to help the gaming industry’s sonic aesthetic take off on the cliffhanging leaps and bounds provided by the wings of dragons -– if not necessarily their controls.

Click on the link to Purchase the LAIR soundtrack