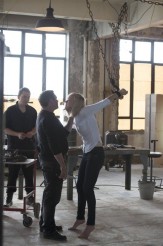 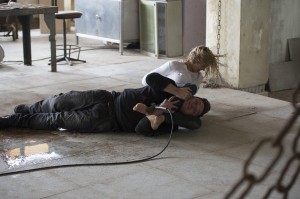 This was a damn good episode of 24: LIVE ANOTHER DAY.

Action packed from start to finish with some pretty good tense moments where even though we knew the outcome was still nail biting in some sense.

We also got to see Yvonne Strahovski’s Agent Kate Morgan finally be the badass that we pretty thought she was going into this show. It is an interesting character she is playing given that StraHOTski played a CIA agent on a television show once before. You may have heard of it, CHUCK? The difference here is that Agent Morgan is a genuine badass, nearly a female Jack Bauer (Kiefer Sutherland). In CHUCK, as Sarah Walker she always kicked ass but there was always funny undertones and she did so out of a sense of love.

Here on 24, she’s doing things to survive and get answers. And that means getting the sh** tortured out of her by a bunch of bad guys after being offered up on a silver platter by Jack who conceived a plan that she would be drugged and unable to be tortured. Well, that didn’t work when the arms dealer with ties to the terrorist Margot Al-Harazi (Michelle Fairley) had a way to revive her before Jack was able to get a bug implanted on the arms dealer’s laptop in hopes of pinpointing the location of Al-Harazi.

Of course, it gets even worse for the duo when the British send in Special Forces to track Jack and they initiate a raid before the transaction and the bug tracker can go through. Luckily, Jack is Jack and he finds a way to do it while killing numerous red shirts along the way before things get completely out of control.

Speaking of Kate Morgan, it now sure does appear that her husband who was convicted of selling American government secrets sure has some more layers to the onion than we were first led to believe. The moment where Agent Navarro (Benjamin Bratt) takes a call from a mystery someone regarding information about her husband and the secret files that may have been deleted, there is obviously something going on there that smells nefarious. But who is in the wrong here and how will it affect the overall plotline remains to be seen. Is Navarro the mole we have been waiting for?

With Jack set free to help President Heller (William Devane) avoid the disaster from his own drones striking the population of London, 24 is really heating up and only six episodes have aired. This means a greater threat could emerge or some sort of monkey wrench in finding Al-Harazi could happen but there is still enough time to make this one hell of a season.