The actor talks his leader role on Fox's new drama 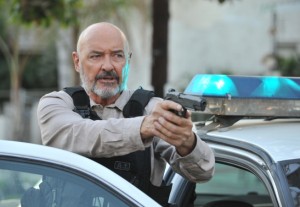 In Fox’s new drama GANG RELATED, Thursdays at 9 PM, Ramon Rodriguez plays Ryan Lopez, who has just been accepted into LAPD’s prestigious, and dangerous, Gang Task Force. What no one in the LAPD knows is that Ryan is actually the adopted son of gang patriarch Javier Acosta (played by Cliff Curtis) and originally joined the police as a mole. However, Ryan takes his duties seriously, and his divided loyalties are beginning to take their toll.

Terry O’Quinn plays Ryan’s task force boss, Sam Chapel. O’Quinn, who made an indelible impression as the title character in the original film THE STEPFATHER and won an Emmy for his portrayal of John Locke on LOST, recently headed up the supernatural drama 666 PARK AVENUE, appeared on FALLING SKIES and has a recurring role on HAWAII FIVE-0. At an event Fox holds for the Television Critics Association, the Michigan-born actor sits down for some GANG RELATED talk.

AX: What drew you to GANG RELATED?

TERRY O’QUINN: The script – it has to start with the script. Somebody can call and say, “I’ll give you five million dollars an episode” and I don’t care what the script is, but that didn’t happen. They sent me a script and I liked it. So the producers, the people who were involved in FAST & FURIOUS and THE SHIELD, look like they have a good track record. The script looked promising, so I hopped on board.

AX: Were you looking to do another series after 666 ended, or did this just come along and you went, “Okay, I really like the show”?

O’QUINN: I’m just an actor who looks for work when he doesn’t have it. That’s all. I was in Hawaii at the time, I was doing FIVE-0 and they called up and said this was available. I need to work for two reasons – because I go crazy when I don’t work and I need to get paid, so this looked like the best opportunity. It came up all of a sudden, I mean, it just fell out of the blue. They said, “You have to tell us tomorrow if you want this job.” So I thought about it, discussed it, looked at the script a lot, looked at the reality of trying to stay alive and pay the bills, and said, “This looks like a good job to me.”

AX: You’ve played a lot of commanders and people in charge. Is Sam Chapel particularly different from other characters you’ve played before?

O’QUINN: He’s not terribly different from commanders in the aspect of their being commanding, but he’s a cop who’s willing to stretch the limits of the law a little bit. He’s not a good family man. He feels different to me in terms of the relationships he has with people in his task force and his obsession with some of our bad guys.

AX: Does Sam quickly cotton to the fact that one of his men is a double agent, as it were?

O’QUINN: At the beginning of this series, he is unaware. Nobody in the task force is aware that one of the people in the task force was raised by Los Angelicos, which is the Latino group that is one of our main focuses against whom we’re fighting.

O’QUINN: Well, I think the possibility of him finding out is one of the things that drives the show. I mean, the question is, at what point do you burn up that fuel? You have to always create things – there always has to be a danger and a risk. In the present, that’s one of the dangers. So I’m sure at some point he will find out. Whether I will like it or not is kind of beside the point, because I think they always have to keep that card, and when they decide to play it, it’s going to be a big deal.

AX: Are there places you’d like to see Sam go?

O’QUINN: No. You know, I never really think that way, of places I would like to see my character go. I just want him to be interesting. I want to have good lines to say and I want the story to remain interesting. I don’t root for or against the character. You of course have to feel for your own character, but there aren’t story elements I would like. I’m happy to have some good writers, and so far, I look forward to getting the script. Every time we get the scripts, everybody in our cast is pretty excited about getting the scripts, which is a great sign.

AX: Are there particular muscles you have to use as an actor when you’re the guy in charge to not intimidate your fellow actors, but to play that relationship like you’re in charge and they’re looking up to you?

O’QUINN: Yes, I think there are particular muscles you use for assuming that kind of authority. There are also particular muscles they have to use to recognize it [laughs]. They have to understand that I have the authority. Not every captain on a police force necessarily has that authority, that natural gravitas. And not every person in authority necessarily deserves it. So you have to ask the other [actors] whether they have to work hard to believe that I carry that kind of weight. But I try to assume that mantle naturally and comfortably; I try not to crack the whip too much beyond what is natural for the character.

AX: The flashbacks in LOST aside, you’re not very often cast as kind of a timid or uncertain person …

O’QUINN: No, I’m not. Hopefully, before I finish, I’ll get to be that person. At least there were those flashbacks in LOST [laughs]. But I think that it’ll be interesting to find out what Sam Chapel’s vulnerability is his daughter. He has vulnerable spots. 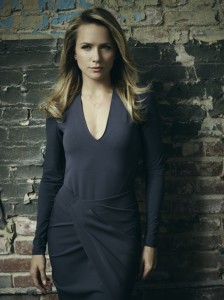 SHANTEL VANSANTEN: I was just singing your praises over there.

O’QUINN: I was saying you’re one of my soft spots.

VANSANTEN: You have a soft spot for me?

[VanSanten says goodbye and heads to her next interview.]

O’QUINN: So his loyalties are his weaknesses. He has loyalties to the people that work for him. He’s a team member, he’s one of those guys who supports his fellow officers, at least the people on his team. They become his family, and that young lady, Jessica, is his only child. He obviously has a soft spot for her.

AX: They don’t seem to have the greatest parent/child relationship …

O’QUINN: Oh, no, it certainly isn’t. I think he was too into his job as a police officer to do his job as a father as he should have done. So in the beginning, at least, they don’t have a good relationship.

AX: Is he trying to rectify the bad relationship, or is he defensive and saying, “You’re making too much of this” with her?

O’QUINN: Well, I think both of those things are [happening]. If he’s trying to rectify it, he’s not doing it very well, and he can try harder, but all we know after the first episode is that they don’t have a good relationship – there’s some kind of resentment there. He still has an attachment and hopefully he’ll work on that.

O’QUINN: Yes, he does. He brought that young man along, he brought him into the task force, so he’s kind of his sponsor, and I think he respects him and sees something similar maybe to himself. Or maybe he wishes so, because Ryan Lopez, despite his being in a pickle, trying to serve both masters, is a good person and he seems like an honorable man. He has to carry on all these lies. And Sam Chapel sees himself as an honorable man. We’re going to have to see how it turns out.

AX: Do you get out of the office much on GANG RELATED?

O’QUINN: I get out of the office probably more than I would wish. I’m chasing bad guys as much as some of our young folks. He’s one of those guys that you’ll have to force him to stop putting on the Kevlar vest, running around chasing people, because he likes to see himself as still being active. He’s still strong and active. His day is coming.

AX: Do you get to handle any guns or equipment or drive anything that’s new for you?

O’QUINN: Guns, I probably handle more than I would want. I have no particular desire to shoot ‘em up, I’m over that fantasy, the good guys and bad guys fantasy, so I handle them as best I can, and we have advisors on the set who tell us when we’re doing something wrong. But no, I’m not, if there’s anything really difficult or challenging or dangerous, I let somebody else do it. They get paid to do it. I’d rather have them do it. And they’ll do it better.

AX: You said you’re over the good guys and bad guys thing – GANG RELATED has a lot of morally ambiguous people. Is that one of the things you like about it?

AX: GANG-RELATED shoots in Los Angeles. Do you like working here? You had said previously that you were not entirely comfortable with the big-city aspect of New York when you were working on 666 PARK AVENUE there.

O’QUINN: I kind of got spoiled working in Hawaii [on LOST] for so long. I like having some countryside available to me, so I’m not a big fan of working in the cities, but that’s where this stuff happens, so that’s where we’ve got to be. So the displeasure of working in a place is always ameliorated by pleasure at going to work, working with people who are there at the job. I’m getting a lot of pleasure from that.

AX: Now, are you getting to go back and do more HAWAII FIVE-0, or you can’t do that while you’re doing GANG RELATED?

O’QUINN: No, I can’t do both at the same time. FIVE-0 was always the kind of a job where they called and said, “Whatcha doing?” I said, “Nothing,” they said, “Come on and do a show” and I said, “Okay.” So it’s a pretty casual, loose and free relationship, which I’m grateful for, but we’ll see.

Exclusive Photos from KATY PERRY: PART OF ME Los Angeles Premiere and ...
TV Review: BONES – Season 10 – “The Money Maker on the Merry-Go-Round”
BLACK SAILS: THE COMPLETE FIRST SEASON Highlights this week in Blu-ray...
FARGO: Jeffrey Donovan talks about his role in Season 2 - exclusive in...