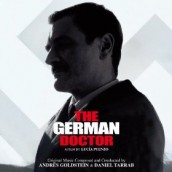 A Nazi-hunting score that finds a disturbingly human sound

While history itself never allowed us the satisfaction of Auschwitz’s “Angel of Death” being brought to justice, that hasn’t stopped the movies from imagining what happened to Joef Mengele during his decades-long sojourn in South America. Now Nazi-friendly Argentina offers their take on this legendarily evil figure with THE GERMAN DOCTOR, which finds the physician brought into the fold of an unsuspecting family, whose daughter he takes a potentially dangerous shine to. But if you’re expecting the rousing Bavarian strains of Jerry Goldsmith’s THE BOYS FROM BRAZIL or the menacing, slithering darkness of Michael Small’s MARATHON MAN, then composers Andres Goldstein and Daniel Tarrab defy immediately classifiable musical villainy with this intriguing, low-key score.

Taking a chamber approach that veers between jazz, a mournful Diduk and acoustical lyricism, the duo’s GERMAN DOCTOR doesn’t so much suggest a Nazi hunt as it does a sadlu soulful road trip caught somewhere between the Latin-inflected, evil-within tangos of Elia Cmiral’s APARTMENT ZERO with a Guastavo’s Santolalla’s psychologically perfective guitar work in THE MOTORCYCLE DIARIES. This is a good musical DOCTOR indeed, a driving, uneasy soundtrack that isn’t interested in portraying a cackling devil as much as it is trying to understand what drives a seemingly pleasant physician to horrifying barbarity. It’s a melancholy, even poignant work whose real tension comes from when this betrayal of trust will be unmasked, even with the tension of an Israeli pursuer at hand to most definitely qualify this as a uniquely suspenseful score. Released on Quartet Records under the title of WAKOLDA last year, you can also track down the soundtrack’s English identity on iTunes as well.

Click on the link to Purchase THE GERMAN DOCTOR (WALKOLDA) soundtrack