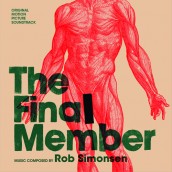 Rob Simonsen scores a documentary with his big head

Whether it was a mildly horny teen in THE WAY WAY BACK, a guy getting it on with his dream girl through a good number of the (500) DAYS OF SUMMER or a high school senior MacDaddy facing THE SPECTACULAR NOW, Rob Simonsen has scored more than a few films where using one’s penis is of vital importance. The difference with THE FINAL MEMBER  is that it becomes a detachment contest among three particularly giving guys who want to donate their Johnson to the Icelandic Phallological Museum, the preeminent (and only) penis museum on the planet that needs to complete their collection with a homo sapien male’s most pleasurable part.

Simonsen’s score is also a small work of wonder, one that’s about as eccentric as you’d expect given the subject. You might even call it a sly satire of the quirkily flowing documentary music that one could hear from TIM’S VERMEER to THE UNKNOWN KNOWN. Except here, this thoroughly enrapturing tapestry of styles is dedicated to finding out just why one would donate a penis, especially one donor would still be walking about. But while there’s rhythmic quirkiness to spare (especially as there’s something naturally mirthful about Iceland), Simonsen’s range from classical melodies to waltzes, tender piano, a yearning violin and eerily enticing bells is a whimsical observer, as opposed to going for easy laughs. In the end, Simonsen’s MEMBER is quite beautiful and even touching, purposefully playing against subject matter that would have any other self-respecting penis owner holding onto their members for dear life. Errol Morris and Ken Burns would be happy to possess Simonsen’s versatile and enticing MEMBER.

Click on the link to Purchase the FINAL MEMBER soundtrack