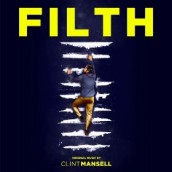 Clint Mansell gets his mesmerizing music dirty once again

Clint Mansell has a rocking way of descending into madness, whether it’s a math savant drilling a hole in his head to solve an impossible equation, having the savior of the great flood become convinced he’s got to sacrifice a first born, or manically playing a bunch of junkies hallucinating their way to hell. Fuel his style of using rhythmically intensifying waves of electric guitar and symphonic psychosis with the drug-addled imagination of TRAINSPOTTING author Irving Welsh, and you’ve got a powerfully unhinged recipe for one very bad Scottish lieutenant in FILTH. The twisted cop’s nationality cleverly accounts for the bagpipes that show up amidst the gnarled acoustical chords, deceptively calming strings and piano patterns that build to a emotional epiphany, percussion hammering away like the climactic drum solo before one’s self-destructive explosion.

Yet given just how far Mansell has gone out on stuff like PI and REQUIEM FOR A DREAM, the composer’s FILTH isn’t quite the purposefully crazy mess of excess you’d expect, managing to be quite melodically pleasing as it ventures between the peaks and valleys of melancholy meditation to humorous junkie frenzy. The effect of Mansell’s escalating approach is no more evident than during the ruthlessly determined 15 minute climactic cue, which shows his intense way of ever-so-slowly supercharging a memorable theme, the instruments gradually adding onto each other to a reach a plateau of psychological, and musical intensity that’s nothing less than gripping. FILTH once again shows there’s no composer who can make the wallow of a bad trip as musically good, or mesmerizingly intense.

Click on the link to Purchase the FILTH soundtrack