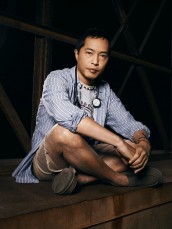 The actor talks his role on the new NBC drama 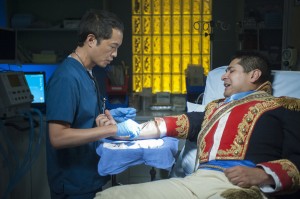 NBC’s new drama THE NIGHT SHIFT, Tuesdays at 10 PM, is set in the night shift of a busy San Antonio,Texas hospital that has the only open after-dark emergency room for miles around. Ken Leung plays. Topher, who served as an Army medic in Afghanistan with his friend T.C. (Eoin Macken), who’s also on staff here.

Leung, a New York native, is familiar to LOST fans for his role as Miles Straume. Other series roles include recurring characters on PERSON OF INTEREST, DECEPTION and ZERO HOUR; feature credits include X-MEN: THE LAST STAND (as Kid Omega) and THE INSIDE MAN.

Leung is present at NBC’s press day, where he talks about the series and his character.

ASSIGNMENT X: How would you describe THE NIGHT SHIFT?

KEN LEUNG: There’s a lot of talk about this being a hospital show. For me, it’s not so much about that. I think the hospital is the playground and it’s really this new family that these doctors have created for themselves. So I’m more interested in that sort of thing, like the relationships between the doctors, and not so much anything to do with medicine, really.

AX: Have you played medical professionals before?

LEUNG: I’ve played doctors before many times. And it did occur to me that there’s this thing where, if you’re an Asian character, statistically, you are a doctor or a gang member or these sort of stereotypical roles. And my answer to that – my hope, as far as that’s concerned – is to not avoid those roles as an actor. In order to dissolve the stereotype, you need to embrace it, inject truth into it and humanity into it and that that stuff will dissolve the stereotype.

LEUNG: Well, maybe, but in terms of the Asian-American community, we’re a little tired of being a positive or a negative. We just want to be human. We want to be people, three-dimensional people who have problems and are flawed. And as an actor, that’s the stuff, that’s the soup that we have fun swimming in.

AX: Does your character’s ethnicity come into the storyline at all, or is it pretty much that he’s in the E.R. and he’s married?

LEUNG: It comes in when we joke around or something. So a little bit, but by no means is it a huge factor – not yet, anyway.

AX: Did you have to learn anything new for this role in terms of medical procedures?

LEUNG: Constantly. That is an in-progress thing. Ee had this boot camp with Dr. Letskey, we have an on-set medical technician who helps us with each procedure, and day to day, we’re learning new things. I don’t think we’ll ever get to a place where – it’s not like we’ll actually become real doctors and thereby not need any more preparation or learning. I think this will happen for the life of the series.

AX: Does playing Topher let you do the kinds of nuances and range that you’re looking to do as an actor?

LEUNG: It does in places. It’s very fast-paced. We deliberately wanted the pace to mimic the actual urgency in these actual emergencies. But the short answer is yes. There are quiet moments and kind of human one-on-one moments and people deciding what to do with their relationships and whatnot. And it’s still unfolding.

LEUNG: No. We stay completely out of the politics. Actually, our whole point is to put people before money. Now, that sounds kind of heroic. It’s a little ignorant [laughs], as the [Michael Ragosa played by Freddy Rodriguez] character reveals to us, but the characters T.C. and Topher, they were doctors in Afghanistan together, they were pretty much brothers. So it’s really more about that brotherhood than anything to do with political rules.

LEUNG: I see him as a little bit of a peacemaker who slowly realizes that his own peace is collapsing. He can talk to both sides of the political argument. T.C. is very responsive to him, as well as the Ragosa character, so he can talk to all sides. And so in that sense, he is a peacemaker. But the interesting thing about that is, his personal life kind of makes him on shaky ground as far as that goes.

AX: Is there anything else you’d like to say about THE NIGHT SHIFT?