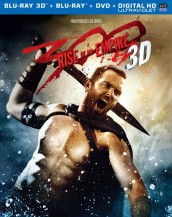 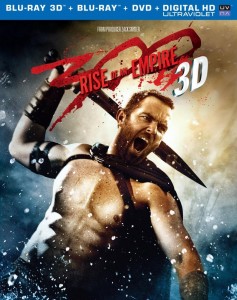 300: RISE OF AN EMPIRE – Craving some CG blood? Well, this is the film for you because the digital blood in 300: RISE OF AN EMPIRE you could fill an entire backyard pool with (maybe two). This sequel to the highly popular 300 movie, featuring a small band of warriors from Sparta (SPARTA!!!!) that try to fend off the advances of the Persian Empire into their land. What worked in the original (with crazy slow motion action and plenty of CG blood being tossed about) gets amped up to whole new levels as the body count is higher, the battles that much bigger and nearly non-stop action. Now this is fine and good if you crave a movie that is a no-brainer and you literally just watch the carnage from start to finish. But as far as character development, acting or storyline are concerned, they left it at the door.

Again, this isn’t that bad if you go into it knowing what to expect. If you are going into this sequel expecting a grand film about brothers, bonding and a semblance of storyline about Greeks fighting for their culture, you will probably be disappointed. On a pure action film level, it works because there is plenty of action and loads of bodies, death, CG effects galore and some impressive imagery. So I appreciate that the filmmakers went after this aspect of the movie and left much of the other things many movie goes crave behind. Now, this won’t make a lot of the fans of the first film happy because they enjoyed the action along with the good storytelling and indeed many fans of 300 have called this film crap. I look at it as what it is: a brainless action film with plenty of eye candy. Because of that, it was enjoyable and really looks pretty awesome in high definition. 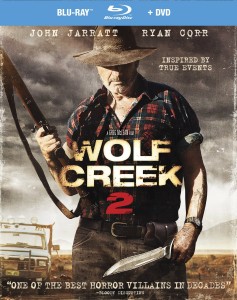 WOLF CREEK 2 – I always expect sequels to anything to have a secondary title such as WOLF CREEK 2: WOLF CREEKIER. But if you saw the first WOLF CREEK, you know that this isn’t a franchise that needs any gimmick. WOLF CREEK stands as one of the most brutal horror films ever produced. It was the story of a couple of stranded backpackers that run into a friendly bushman in the wilderness of Australia. Naturally, the bushman is anything but friendly and is really a crazy serial killer that has been haunting the Australian outback for years preying on tourists. What made the film especially brutal was the bushman’s tactics of severing the spinal cord in order to render the victim unable to do anything then taking his time to have at them. Luckily, WOLF CREEK 2 doesn’t pull any punches even if it follows a similar formula from the original. While the body count is indeed higher, as to be expected, much of the film is a chase between the bushman and an unlucky British tourist that picks up the wrong German tourist trying to escape. While it doesn’t match the tension of the original, there is some real good cat and mouse that goes on once the British bloke is captured. 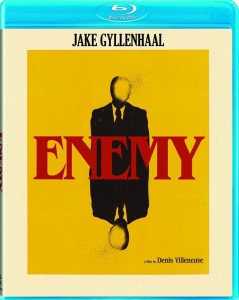 ENEMY – What would you do if you found out that there was another you running around leading an entirely different life? How would you act? What would you do? ENEMY is an odd duck of a movie. It begins with some weird symbolism about a fetish club where half naked women crush tarantulas with high heels and it carries over into the entire movie. Jack Gyllenhaal stars in a double role as a bored history professor and a wannabe actor both living separate lives but are the exact same person. When one discovers the other after watching a movie he was in, he tracks him down and their loved ones become an object of desire between the two. Between it all is an odd fever dream feel where there are spiders crawling through New York, crawling on objects here and there and more. Are they same person and is this symbolic imagery of infidelity? Is it all just a dream? Is it a stressed or drug induced fever dream? We are left to decide. It is an interesting film but don’t expect concrete lines to be formed while watching. 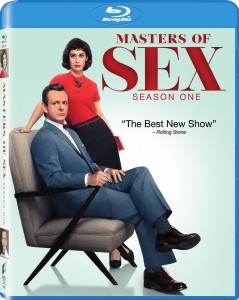 MASTERS OF SEX: SEASON ONE – There have been a lot of “masters” series on television. MASTERS OF HORROR, MASTERS OF SCIFI and on, but while those were more anthology series, MASTERS OF SEX focuses on two real-life people that pioneered the science of human sexuality. Now on the surface while that alone sounds like possibly the most boring series of all time, luckily they don’t have sex in the title for nothing and having über hot Lizzy Caplan taking off her clothes all the time and they have a number of crazy people doing crazy stuff that of course involves sex. All 12 episodes from the first season is included in this set as well as deleted scenes and five cool featurettes on the making of the series and the art of taking their clothes off. As the show has been given a second season on Showtime, this is a great chance to catch up on what you missed before the second season begins. 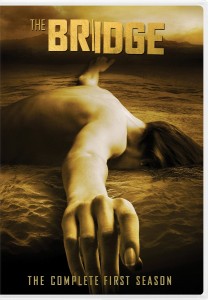 THE BRIDGE: THE COMPLETE FIRST SEASON– FX has been putting out some pretty good television for a number of years now but one of the shows that may have gone overlooked is THE BRIDGE. An interesting mix of characters and brutality, the show examines life on the border between El Paso, Texas and Mexico. It begins with the discovery of a brutal murder or murders as multiple body parts are found leading to a detective with Asperger syndrome to lead the investigation. But more than that there are drug cartels and mysteries and complex plotlines that all seem at some point to be interconnected. THE BRIDGE is not one of those shows you can watch in the background or not pay attention to because there is so much going on that you need to pay attention. The episodes are interesting and show how bad the people defending borders have it and what they are dealing with on a daily basis. This is a show that has a lot of potential to carry on for a number of seasons with a virtual cornucopia of fodder to make things interesting. If you missed it when it aired, definitely worth checking out now it is on Blu-ray and DVD.