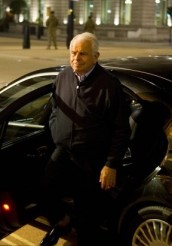 Round up the horses, we’re in for a heck of a finish 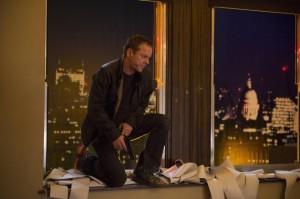 So last week I did this whole tribute to President Heller and his history on 24, because after the events of the episode it appeared as he died.

Count me as swerved.

The opening of 24: LIVE ANOTHER DAY, “7:00PM to 8:00PM,” showed that at the last minute, Heller (William Devane) was not standing in the middle of the stadium but Jack (Kiefer Sutherland) had Chloe (Mary Lynn Rajskub) alter the drone footage to make it seem as if he was standing there. Clever girl.

Of course, now I won’t believe anyone is dead ever again until I see body (confirm the kill!) but it is nice that 24 got me again after all this time. This was yet another all-out action episode as Jack and the CIA raced to stop Margot Al-Harazi (Michelle Fairley) and her son before they were able to launch the last drone’s missiles into the London populace. Because after the big reveal that Heller was not killed, of course Al-Harazi and crew learned it was a ruse but after ditching five of the six drones, they saved the last one for one final epic disaster.

Luckily, Jack was able to stop them. And stop them in brutal, awesome fashion. First he rappelled down the side of the building they were held up in, threw Ian Al-Harazi (Liam Garrigan) out the window to his death, stopped the drone from delivering its payload and then threw Margot Al-Harazi out the window to her death because, well, why not. Even for Jack Bauer, that was pretty damn impressive and extremely brutal.

But after Jack delivers the military hacking device back to the CIA all seems resolved. But the little subplot that has been developing with Steve Navarro (Benjamin Bratt) and his apparent cover-up of what really happened with Agent Morgan’s (Yvonne Strahovski) husband rears its ugly head. Navarro working with Adrian Cross (Michael Wincott), Chloe’s boyfriend and leader of the rogue hacking group which spawned the device that set this season in motion, work a deal for Navarro to steal the device in order for him to escape whatever dastardly deeds he did in the past. Obviously, Navarro was the one selling secrets and framed Morgan’s husband.

Navarro, confirmed as the mole, steals the device after taking out the military advisor, gets chase by Jack and fires his gun at him setting the stage for the next episode.

Now, if the previews are any indication, the device can do a lot more than just control drones and Cross seems to have a bone to pick with someone in regard to activating a nuclear submarine. We still have four episodes left so anything is bound to happen but surely they won’t use a U.S. nuclear sub to nuke another country would they? Would they?