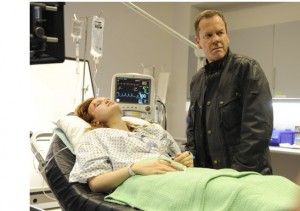 Jack (Kiefer Sutherland) races to save Simone (Emily Berrington) from her mother on 24:LIVE ANOTHER DAY | © 2014 Daniel Smith/FOX

It is always an interesting development with the presidents that are portrayed on 24.

In 24: LIVE ANOTHER DAY, President Heller (William Devane) might be falling into the case of President Taylor as it certainly appears at the end of episode 7, “5:00PM to 6:00PM,” he is willing to give himself over to Margot Al-Harazi (Michelle Fairley) to prevent her from bombing the hell out of London. Not only does this end all the talk about “negotiating with terrorists” but it certainly seems as if the Alzheimer’s that he is suffering from won’t have time to take effect as she wants revenge for killing her husband and others.

Now it might be a swerve as 24 is very adept at giving crumbs to snack on and then turning the tables on what really happens. But if the previews hold any water, it sure appears as if Heller will get help from Jack (Kiefer Sutherland) to meet Al-Harazi in the next episode. Of course, that means that Jack will probably be labeled as the bad guy yet again since he already isn’t on the best of terms with much of the U.S. government, let alone the Russians wanting to get their hands on him for what transpired in Season 8.

This is definitely a more interesting twist than what happened during the rest of the episode, which was more of an escape from the drone than anything else. Jack and Kate Morgan (Yvonne Strahovski) in an effort to save Simone Al-Harazi (Emily Berrington) from her own mother trying to kill her, evacuate the hospital she was being treated at after getting hit by a car and have to dodge a drone firing missiles at them at every turn.

Luckily, Jack is a crafty driver and they escape and while the special effects were really well done, it just was a scene out of any other movie or TV show where people were dodging bombs or whatever. Nothing original.

However, given how well done the season og 24 has been, a miss here or there (and it really wasn’t a miss just not as good as the other episodes) should be expected.