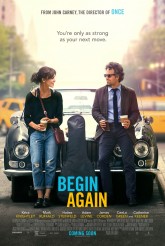 Charm and some interesting storytelling bog down in increasing convention

BEGIN AGAIN follows its title and actually starts over several times, to good effect. At first, we’re in a small folk music club inNew York, where performer Steve (James Corden) insists that his friend Greta (Keira Knightley) take the stage. Greta is deeply reluctant, but eventually plays and sings a song she wrote about contemplating throwing herself in front of a subway train. Most of the crowd talks through the song, but one man, Dan (Mark Ruffalo), stands stock-still, delighted and transfixed.

We then get to see what kind of a day Dan has had, why he relates so much to the song and why he sees so much potential in the entire situation. After this, we start over again and see what has brought Greta to her current status. All of this has a fair amount of charm and chagrin. Ruffalo is a compelling actor who brings dimension and credibility to his characters, and Dan is no exception. We can see the conflicting sides of the man, both what draws people to him and what drives them away.

Knightley has warmth and a sweet singing voice as Greta. Writer/director John Carney’s script tries to have it too many ways with the character, though. In trying to make her seem less of a careerist than the men around her, Greta has been written as relationship-dependent to the point of being wishy-washy. We’re glad to see her grow, but there’s something a little generic about her.

There’s also something a little generic about the songs that Greta and her on-again, off-again boyfriend Dave (Adam Levine, doing good work in the role) write and perform. When Greta rails against the conformity of the music industry and is then pleased with the way her plaintive, gentle folk songs are swamped with strings, we’d think the film was sending itself up if this all weren’t so straight-faced.

On the upside, BEGIN AGAIN surprises us frequently, which is usually a good thing. Relationships don’t always go where we might expect and there’s a nice, sly take on a recent phenomenon in music that gets just the right amount of push from the movie. Then again, a few of the surprises are of the less welcome deus ex machina variety.

It’s easy to see how BEGIN AGAIN could have been a huge star vehicle musical a few decades back. In 2014, it’s a friendly little indie displaying some fine performances and a clever storytelling style, even if its musical tastes are far more conventional than they should be for the characters.