Home » THE MONUMENTS MEN Highlights this week in Blu-ray, DVD and VOD Releases 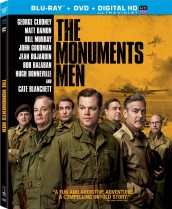 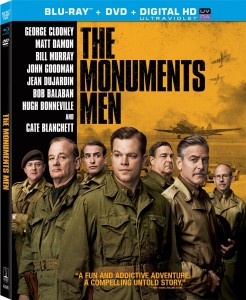 THE MONUMENTS MEN – I’m a World War II junkie and love pretty much anything Hollywood puts out in the genre. Hell, I even watch Russian movies about STALINGRAD – which was an interesting take on the bloodiest and nastiest battle of the war – just the other week. So when I saw THE MONUMENTS MEN advertised about a group of soldiers tasked with tracking down works of art that were presumably scooped up by the Nazis, it seemed like it would be a no-brainer for me. Also doesn’t hurt that is has an all-star cast in George Clooney, Matt Damon, Bill Murray, John Goodman and Cate Blanchett. Luckily, the strong cast and interesting idea carries over to the flick as the after being assembled must cross over into enemy lines in order to secure some of the works of art that have been collected by the evil Germans. Supposedly this is based on a true story or at least certain facts that happened during the war which makes it all more the better that someone at some point in our history actually carried out this type of Mission Impossible raid. Maybe the only thing missing here is that it might have worked better as a BAND OF BROTHERS type mini-series given the scope of what is attempted here. Two hours is simply not enough time. But definitely recommended if you enjoy WWII history or films. 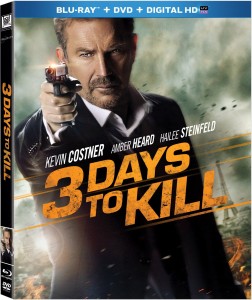 3 DAYS TO KILL – I’m not the biggest fan of Kevin Costner but I am not a hater either. In 3 DAYS TO KILL, Costner stars as a lifetime member of the CIA and has gotten extremely good at killing bad guys. When he is ordered to take down a criminal kingpin in Europe things go awry because he has some sort of episode. He is soon diagnosed with only having a few months to live. So he moves back to Paris to try to reach out to his estranged daughter and wife. So the movie turns into half Costner’s redemption in becoming a father he never was and trying to make up time before he croaks over and half of him killing a slew of bad guys tracking down this criminal kingpin while having Amber Heard on his ass as his CIA boss. Of course, both of these plotlines end up colliding as you would expect but it actually does it rather cleverly so it isn’t necessarily trite. Overall 3 DAYS TO KILL is an entertaining flick with a balance of good humor and bloody deaths. 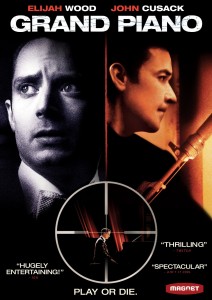 GRAND PIANO – Now you would think that a movie centered on a guy playing the piano during a classical concert may be the most boring thing in the history of cinema. Especially, when that movie is billed as a thriller. You’d be wrong in this case, as GRAND PIANO is actually quite entertaining and star Elijah Wood does a pretty good job selling the material that he is given. Wood plays a marvel of a piano player that is experiencing a bit of a bad luck streak of late as he has bouts where he chokes on stage. But his latest classical performance is set to be his great comeback. The only problem is that one very determined safe cracker wants him to play a specific piece on a specific piano in order to unlock some sort of treasure that can only be played by the hardest song in the history of mankind. So he points a gun at him during the performance and sets him on a course of either play the chords perfectly or get shot in front of hundreds of people (as well as seeing his wife get blasted right after). John Cusack also stars but he is more subtly used as the menacing bad guy high in the rafters terrorizing Wood. Pretty good and very different thriller and worth checking out. 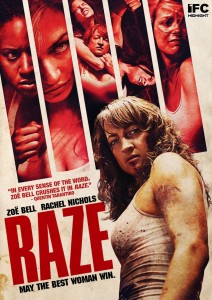 RAZE – The world of mixed martial arts has invaded a good portion of our entertainment for a number of years through the UFC pay-per-views and television. But there are as many movies featuring MMA as every before. RAZE, while not necessarily a MMA flick, takes a different approach. A group of women find themselves trapped by a couple that is pitting them to the death against each other with no weapons. Bare knuckles, legs and arms only. Why they are doing this is a bit of a mystery but it has something to do with joining this group of crazies after finding the strongest among them. So they are forced to fight one another until only one is victorious. Yeah, it gets a bit tedious seeing women fighting each other over and over again without knowing much of an endgame other than a HUNGER GAMES finale. Zoe Bell, the stunt woman turned actress, stars in the lead role and does a decent enough job with what is given but there isn’t enough meat here for it to be more than just a rental option. 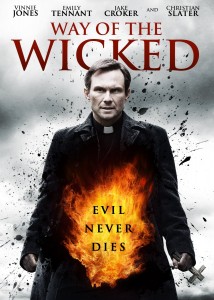 WAY OF THE WICKED – Christian Slater gets top billing in this so-called horror flick but he’s barely in it as a priest trying to figure out why some dude seems to have supernatural powers and uses them to abuse others whenever he gets picked on. He believes the powers are from Satan! Now, here’s the thing. If the guy only defends himself when he gets bullied, is he really is the spawn of Satan why not just mess with everyone all the time. Yet, he only does so when he is abused. Turns out he may actually not be the dude with powers but you can see this coming a mile away. The rest of the movie plays out as a really bad TWILIGHT knock off sans werewolves or vampires. Girl likes the oddball dude but the class jock wants her for himself. WAY OF THE WICKED maybe a Netflix option at best as there is nothing scary here other than maybe High School.