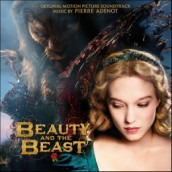 A tale as old as time, and the movies, gets a fantastical, live action French reboot from Christophe Gans, a director who knows something about fearsome animals after making BROTHERHOOD OF THE WOLF. Beyond its stylized snowscape, a standout spell for this relatively faithful version is its gorgeous score by Pierre Adenot, whose lavishly melodic and utterly enchanting score conjures the light and darkness of fairy tale imagination in any musical language, sans the singing teapots.

Having scored numerous films in his native land (with his contribution to PARIS JE T’AIME likely being most familiar to American audiences), BEAUTY AND THE BEAST announces Adenot’s major symphonic talent with an internationally minded roar. At first, there’s a shivery anticipation to approaching the beast’s lair, with foreboding, lurching brash, tense strings and dulcimers that evoke the Baroque setting. As exceptionally played by a lush orchestra, Adenot captures the feeling of innocence stepping into the big bad wolf’s den, only to melodically find that kindness lurks behind the spell-woven fur. And sure enough with the help of pixie dust bell percussion, a spectral chorus and darkness that becomes ever more playful, the musical thaw comes quickly to this BEAST, whom will turn into a romantically gruff pussycat by the score’s end. Yet there’s a melodic intelligence and outright splendor to Adenot’s strongly thematic work, his densely orchestrated music a gorgeous tapestry on which Gans can hang his stylized imagery. For whether the composer is George Auric or Alan Menken, there’s a romantically enchanted cloth that any BEAUTY AND THE BEAST score is cut from, an exceptional tapestry of bad first impressions growing into thematic full bloom for piano, lush strings and waltzes both humorous and romantic, while here also paying off Gans’ more adventurous demands (including a giant). Like the best fantasy scores, BEAST beautifully captures the kind of sumptuously melodic, magical emotion that draws child and adult to forbidden realms where one’s darkest fears, and most hopeful desires await, often in same fanged package.

Belting out the romantic “How Can You Love Me” with far more desperation than Angela Lansbury applied to BEAUTY AND THE BEAST Yoann Freget’s song provides a stirring, pained power ballad sung in both English and French, turning one woman’s ability to see the man beneath the fur into a universal plea for acceptance, a message that bonds well with Adenot’s more musically complex approach to this back-to-magical basics “Beast” its soundtrack well worth buying for any fan of the story, and all-encompassing spell of musical fantasy at its best.