The actress talks her character and working on TV Land 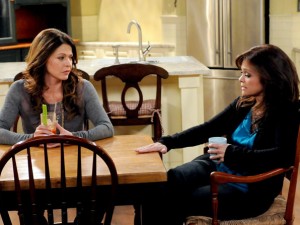 When TV Land first launched the half-hour comedy HOT IN CLEVELAND in 2010, not everyone had heard of the network, much less the show. Now the series created by Suzanne Martin is in its fifth season, Wednesday nights, and plenty of people are familiar with creator Suzanne Martin’s characters. Jane Leeves, Valerie Bertinelli and Wendy Malick play three friends from L.A. who’ve moved to the Ohio town, with Betty White as their unique new friend Elka.

Leeves has plenty of half-hour comedy experience; the England-born actress spent eleven seasons as Daphne on NBC’s hit FRASIER. Following a blocking run-through that TV Land allows members of the Television Critics Association to attend – and which earns lots of honest laughs – Leeves takes some time to talk about playing her HOT character Joy Scroggs.

ASSIGNMENT X: Were you looking to do a comedy when HOT IN CLEVELAND came along, or did you just think, “Well, this sounds interesting”?

JANE LEEVES: I was certainly in the market for a half-hour comedy. I had been approached about some hour-long dramas, but I have kids, and I know friends who do them; the hours on those are hideous. And my husband was always like, “Oh, I don’t want you doing that, please …” And when this came along, I read it and I fell in love with it immediately. And then when I heard who was cast, I just jumped at the chance, because I’ve known Valerie for over twenty years. Wendy and I just worked together on FRASIER for a year and I’d met Betty a couple of times, so they’re just a dream come true, and Suzanne Martin was one of the writers on FRASIER, so I went in and met with her and [executive producer] Sean [Hayes] and the boys, and it was so easy.

AX: HOT IN CLEVELAND kind of put TV Land on the map as a network …

AX: So back when you started the series, no one really had heard of TV Land. At the time, did you think, “Well, what exactly is this that we’re airing on?”

LEEVES: Yes. “TV Land? I don’t even know where that is on my channel guide.” But I thought that was kind of great in a way, because having done network shows and especially in the climate now, there’s so much pressure and so much interference, and this was an environment where it was new to them, so they hired people who knew how to do this, from the writers to the directors to the talent, and let us find it.

AX: Even by the early days of FRASIER, the networks were a little bit more “perform or die immediately.” Does this feel to you like what you heard TV used to be like, where they would let a show develop?

LEEVES: Absolutely. When we first started FRASIER, FRASIER was a hit right out of the gate. But I know on other shows, and even shows that our producers at the time were doing, there was a lot of pressure and a lot of interference from the Powers That Be about how it should be. I think what I noticed about this script, when I read it – it didn’t seem like a formula. You know, so many scripts you get nowadays, they think, “Well, that was a hit, so we need a hot Hispanic girl, we need a young boy that the girls …” And it seems like someone’s just run some stuff through a computer. This actually felt like someone’s passion project, like someone had a vision for this.

AX: How would you say Joy has developed from the beginning of the show until now?

LEEVES: I think she has softened a little. I don’t think she’s quite as brittle as she was when we first met her. But I keep saying to the writers, “Please don’t fix me, please don’t make me fall in love with someone and live happily ever after.” Because the joy of playing Joy is that she’s a complete mess and a bit of a nightmare and insecure and desperate to be in a relationship and just makes hideous choices and sabotages every relationship she ever has because she’s so needy and desperate.

AX: Would you ever want to do what your character Joy does, going to sort of a smaller town to reinvent yourself, or do you like it here in Los Angeles?

LEEVES: I’m so different to my character, and I just love my life the way it is. I have such great balance in my life between family and work and great friends, and I love the work I do, so as long as I can keep doing this, I’m happy. I do sort of long for that little cottage inEngland and a fireplace and a cup of tea, but that’s a few years off. I think I’d be happy with that for five minutes.

AX: Do you enjoy performing in front of HOT IN CLEVELAND’s live audience that comes in for the tapings?

LEEVES: Oh, yeah. It’s totally different – your performance changes. They inform you of stuff that you hadn’t even seen. Suddenly they’re laughing, or they’re ahead of you on something – it does change the performance, and you sort of rely on that a little bit, especially with a four-camera [show], you rely on the audience pulling you through as well.

LEEVES: Well, the chatter in the morning is a little bit different. I will say our cameramen now know a little bit more about women than they ever wanted to [laughs], and our director, for that matter. We always spend about twenty minutes, the four of us, in the morning before they can actually get us to do any work, sort of dissecting lives and problems and issues.

LEEVES: Raising my kids, looking after my husband [laughs].

AX: Have you been to Cleveland in real life?

AX: Anything else you’d like to say about HOT IN CLEVELAND right now?

LEEVES: Just that it’s a complete and utter joy to be with these fabulous women whom I love.