Home » True Blood review Death is Not the End 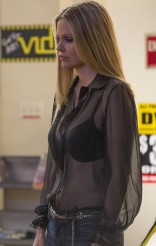 Lots of old faces turn up in a good episode

Maybe it takes the action in “Death is Not the End” to remind us that we really wanted to see somebody in TRUE BLOOD triumph at something by now. We’ve lost Tara and Alcide, Eric (Alexander Skarsgard) is infected with fatal Hep-V, and Arlene (Carrie Preston) and pregnant Nicole (Jurnee Smollett-Bell) are still the prisoners of homicidal vamps. Let’s also not forget the rampaging xenophobic townspeople and the general depressive funk of Jessica (Deborah Ann Woll). Time for something to go right.

“Death is Not the End” begins with two more sad sequences, as Sookie (Anna Paquin) calls Alcide’s father Jackson (Robert Patrick) and Jason (Ryan Kwanten) calls his old friend Hoyt (Jim Parrack) – who doesn’t remember Jason, as Hoyt requested and received a mind wipe from Jessica – to deliver bad family news. There was no reason not to expect to see Patrick again, but the excellent Parrack has been gone for so long that it’s great to see him again, even though poor Jason is heartbroken by the phone call.

Eric and his progeny Pam (Kristin Bauer van Straten) are beginning their search for Sarah Newlin (Anna Camp), but Eric decides he first needs to see his other progeny, Willa (Amelia Rose Blaire). We get some very amusing flashbacks to Eric and Pam’s first days of running the business that would become Fangtasia, complete with how they met enthusiastic human employee Ginger (Tara Buck).

It turns out that the Hep-V vamps are holding their captives in the bowels of Fangtasia. Eric and Pam, of course, know all the secret passages. Eric is still inclined to help Sookie (much to Pam’s exasperation), so he and his progeny join the rescue effort headed up by Sookie and Bill (Stephen Moyer). Jessica, who has been fasting out of guilt for killing three of Andy’s (Chris Bauer) fairy daughters while under the influence, is persuaded to drink from Lafayette (Nelsan Ellis) to get her strength back. Sookie gives blood to Bill, who likewise hasn’t fed in awhile. The rescue effort succeeds, although some of the hate-crazed townspeople show up and get caught in the crossfire. Arlene, drained almost to the point of death, drinks from a helpful vampire in the rescue crew. The rescue is successful, Yay, team.

There are a lot of strong moments here. The reunion between Sookie and Eric is unexpectedly (given their last meeting) tender, though Eric demonstrates his usual lack of tact by starting to rip on Alcide, who’s been dead less than twenty-four hours at this point. The Sookie/Bill interactions are intriguing, with Bill opening the door a bit and Sookie failing to slam it shut.

The flashbacks to Eric and Pam’s early days in Shreveport have more entertainment than plot value (we’d take it on faith that they know any hidden passages connected to Fangtasia; it wasn’t necessary from a credibility standpoint that we see them learn about the old tunnels). It is startlingly funny – and startling that it is funny – to see the near-death Arlene connect with the spirit of her beloved deceased husband Terry (the very likable Todd Lowe), who advises her to stay with the living. As always, Ellis rules every scene he’s in. And it’s just plain satisfying to see the homicidal malefactors wiped away.

“Death is Not the End” has humor, sex, true love and plenty of blood. Bon Temps indeed.