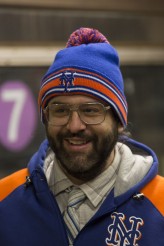 © 2014 Will Hart/Syfy
Judah Friedlander as Bryan in SHARKNADO 2: THE SECOND ONE
Interviews

SHARKNADO 2: THE SECOND ONE star Judah Friedlander takes a bite out of sharks 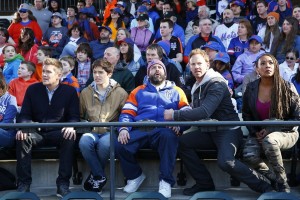 Mark McGrath as Martin Brody, Dante Palminteri as Vaughn Brody, Judah Friedlander as Bryan, Ian Ziering as Fin Shepard, Vivica A. Fox as Skye in SHARKNADO 2: THE SECOND ONE | © 2014 Will Hart/Syfy

Judah Friedlander spent seven seasons playing Frank Rossitano on NBC’s 30 ROCK. Since NBC and Syfy Channel have the same parent company, NBC/Universal, it’s perhaps not totally surprising that the Maryland-born actor/comedian – whose many other credits include the films AMERICAN SPLENDOR, MEET THE PARENTS and THE WRESTLER – wound up in Syfy Channel’s SHARKNADO 2: THE SECOND ONE.

However, as Friedlander explains at a party thrown by NBC/Universal Television for the press, it wasn’t a case of anybody at either network approaching him about the sequel, which concerns a Sharknado hitting New York City. “I went to them. I was a fan of the first one. I was Tweeting it like crazy, and I actually contacted Syfy as well as [SHARKNADO and SHARKNADO 2 production company] The Asylum. I’m a fan of The Asylum and Syfy’s movies. Asylum does a lot of movies that play on Syfy, but Asylum also does some of their own, so I contacted them myself, and they realized I was serious, and it worked out. So it was awesome.”

JUDAH FRIEDLANDER: I play Bryan, a childhood friend of [returning main character] Fin [played by Ian Ziering] and Mark McGrath [who plays Martin Brody]. I’m like a regular Queens guy. A Sharknado attacks his hometown, so got to fight back. I get to play with sharks. I think everyone gets to play with sharks.

AX: Do you get to play with interesting weapons?

AX: Where was the most interesting place you shot in for SHARKNADO 2?

FRIEDLANDER: The subway, the subway train and the Met Stadium was really cool.

AX: How was the real-life weather while you were filming?

FRIEDLANDER: It was in the New York winter. We were filming in seven-degree weather and pretending it was spring or summer.

AX: How did they deal with the snow?

FRIEDLANDER: We used it. When a Sharknado [hits], any kind of weather patterns can happen.

AX: Had you always wanted to be in JAWS, or was this just an opportunity …?

FRIEDLANDER: It’s a genre movie for sci-fi, especially when there’s a little bit of humor thrown in also, it’s one of my favorite genres [Friedlander’s feature film credits also include the horror films FEAST, THE UNSEEN and CABIN FEVER 2]. I had actually contacted Syfy and Asylum a couple of years ago to do some things, and had some offers to do things, but scheduling couldn’t work out. We were able to just make this schedule work out.

AX: At the time you approached Asylum, had they announced there was going to be a SHARKNADO 2?

AX: Did you know SHARKNADO/SHARKNADO 2 director Anthony C. Ferrante before that?

FRIEDLANDER: I met him via Twitter the night of the first airing of SHARKNADO, because I was live-Tweeting it, and we were doing some jokes back and forth the night it aired.

AX: What was he like as a director when you were acting on SHARKNADO 2?

FRIEDLANDER: He’s awesome. And he’s very passionate, and he cares, and I think that shows in the movie. Everyone hustled, worked super-hard, and it’s a hard movie to make, especially in the time frame that we had to make it. To me, it’s what filmmaking is all about.

AX: And did you get to suggest any of your dialogue?

FRIEDLANDER: Yes. I worked with Anthony on it. It was great. It was a very collaborative process.

AX: Before production, or during, or both?

FRIEDLANDER: Yeah. Most of the cast is in it, and let’s say it’s the subway.

I can’t go into details about it, though. We have to keep some things under wraps.

AX: And how did you feel about the ending of 30 ROCK? Did you feel they wrapped it up in a satisfying way?

FRIEDLANDER: Yeah, I thought it was pretty cool. It was such a rare opportunity to be part of a show like that and a show that actually got to end its own way. So it was very unique.

AX: Do you have anything else coming up right now?

FRIEDLANDER: Yeah. A stand-up comedy album. It doesn’t have a name yet. I’m self-producing; I’ll be distributing it over several platforms, as well as a stand-up comedy concert documentary project. Those are my two big projects for this year.

AX: And is there anything else you’d like to say about SHARKNADO 2: THE SECOND ONE?

FRIEDLANDER: If people care about America, they will watch this movie.

Related: Ian Ziering grabs the chainsaw again in SHARKNADO 2: THE SECOND ONE