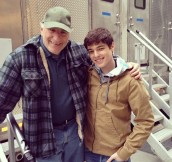 © 2014 SyFy
Judd Hirsch and Dante Palmenteri in SHARKNADO 2: THE SECOND ONE
Interviews

Judd Hirsch takes a bite out of SHARKNADO 2: THE SECOND ONE 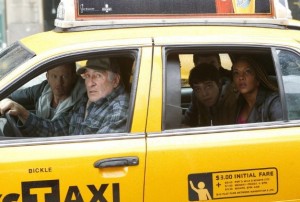 A strange coincidence has landed Judd Hirsch at Syfy Channel’s Beverly Hilton poolside screening of SHARKNADO 2: THE SECOND ONE for the benefit of the Television Critics Association press tour. The sequel to last summer’s surprise Syfy hit is being projected onto a gigantic blank wall next to the pool prior to its Syfy Channel premiere on Wednesday, July 30. The atmosphere is deliberately drive-in theatre, with couches decorated to look like car seats and popcorn and soda stations (as well as regular drive-in dinner fare).

Hirsch was nominated for an Supporting Actor Oscar for his work in ORDINARY PEOPLE, won two Leading Actor Emmys during his five seasons on the comedy TAXI and spent six seasons as one of the leads on NUMBERS, to name a few of his credits. He is also in SHARKNADO 2: THE SECOND ONE as a friendly New York cab driver (shades of TAXI) who helps returning SHARKNADO character Fin, played by Ian Ziering, try to rescue the Big Apple from big fish with big teeth.

However, native New Yorker Hirsch is actually at the Beverly Hilton for ABC’s presentation of its new series FOREVER the following day; Hirsch plays the best friend of an immortal (Ioan Gruffudd). He arrived just in time to find out about the SHARKNADO 2 screening. Following the screening, he’s still seated on the car seat-shaped outdoor couch, continuing to absorb the experience. He graciously answers a few questions.

AX: What did you think of the screening?

JUDD HIRSCH: I had no idea it was going to be this. It’s fun, isn’t it? To see it on a screen this large – I’m playing it on a large screen at home. Don’t watch it on any small screen.

AX: Were you surprised seeing how it cut together as a whole film?

HIRSCH: Yeah, very much. Usually, I have misgivings about how everything’s going to work out – if you’re an actor, you always think, “I certainly hope the surroundings are going to look like something that’s real.” Yeah, I was amazed. The beginning of this movie is really fantastic. The coverage, all the way from the airplane back into New York City, the ball park and everything, is so crisp that the bigger the screen, the better. All the objects are large, like City Field, and everything’s seen from above. It’s such a tongue in cheek [movie]. The kids are going to have a great time; you can hear in all [places where people will watch it] the laughter and the result. Everybody’s going to start to learn all the lines.

AX: Had you seen the first SHARKNADO?

HIRSCH: No. I had no idea what it was.

AX: So how did you become involved with SHARKNADO 2?

HIRSCH: They snagged me. They thought I was some sort of aficionado about sharks. I don’t know. They must have looked up my bio in the wrong way. They got the wrong guy. However, I said, “What will I do?” They said, “You’d be driving a taxi.” I said, “Well, isn’t that a little obvious?” They said, “Yeah, isn’t that fun?” I said, “Yeah, it’s a good idea. I know New York.” [laughs]

AX: Did you have a good time shooting it?

HIRSCH: It was so much fun. I didn’t know the rest of the movie; I sort of met everybody in one day, and it’s [not difficult to play], because I’m playing a guy who doesn’t know them anyway. Somehow, I pick them up in a cab and drive around. I said, “Well, what better part can you have in New York? It’s like driving into a movie.”

AX: How was director Anthony C. Ferrante, who also directed the first SHARKNADO, to work with?

HIRSCH: Oh, Anthony’s dreamy. He’s a real cool guy. I mean, we were in terrible weather driving around in New York [where SHARKNADO 2 was shot]. It was awful. It was very cold, it was raining. You couldn’t have asked for anybody [more] easygoing, completely unworried, everything gets taken care of.

AX: How was it shooting the scene where you try to slide down a makeshift zip line?

HIRSCH: I have the noble death. It wasn’t a surprise – it was like, “Will I make this or won’t I?” We were in the studio. I remember when we were shooting the shot, I said, “I can’t hang from that thing. I’ve never done anything like this before, certainly not at my age.” So they were proud of me, that I survived just swinging. I said, “What happens from here?” They said, “You get eaten!” [laughs]

AX: Anything else you’d like to say about SHARKNADO 2?

HIRSCH: Yeah. It’s daring and surprising and very witty and tongue in cheek. It’s like a ride. I grew up in Coney Island, and this is very much like it [laughs].

Article Source: Assignment X
Article: Judd Hirsch takes a bite out of SHARKNADO 2: THE SECOND ONE