Exclusive Interview: Dante Palminteri on SHARKNADO 2: THE SECOND ONE 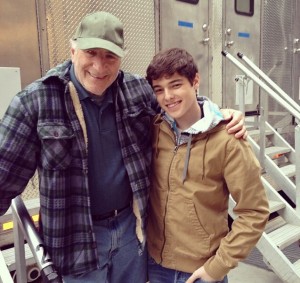 Judd Hirsch and Dante Palminteri in SHARKNADO 2: THE SECOND ONE | courtesy Dante Palmenteri

In Syfy Channel’s SHARKNADO 2: THE SECOND ONE, which has its public premiere on the network Wednesday, July 30 at 9:00pm ET/PT, hurricanes once again scoop massive amounts of sharks on the ocean and create havoc by dropping them onto a major American city. In the original SHARKNADO, it was Los Angeles; in THE SECOND ONE, it’s the Big Apple. SHARKNADO 2 was filmed on location in Manhattan by director Anthony C. Ferrante and written by Thunder Levin, who both held those jobs on the first film.

Dante Palminteri plays Vaughn Brody in SHARKNADO 2, the son of Martin, played by Sugar Ray frontman Mark McGrath, and Ellen, played by Kari Wuhrer. Vaughn is the nephew of returning characters Fin (Ian Ziering) and April (Tara Reid), who’ve survived one Sharknado and are trying to help their extended family survive the new one.

Palminteri, along with director Ferrante, writer Levin and many of the cast, were present at a huge Syfy event for the Television Critics Association, held poolside at the Beverly Hilton Hotel. The area has been decorated to resemble a drive-in, with couches dressed to look like car seats, speakers on stands, and snack bars serving hot dogs, hamburgers and popcorn. There are several fake sharks in the pool, and Mylar shark balloons attached to the poolside furniture. SHARKNADO 2: THE SECOND ONE is about to be projected onto the side of a windowless Beverly Hilton building that faces the pool.

Son of actor/writer/director Chazz Palminteri and actress/producer Gianna Palminteri, Dante Palminteri has been to industry events before. However, he looks simultaneously delighted and stunned at everything happening around him.

ASSIGNMENT X: Have you ever been to an event like this, where your performance is going to be projected on the side of a building?

DANTE PALMINTERI: No, never. This is amazing. This is really my first movie I’ve ever done. I’ve done some shorts, I’ve done some indie films, this and that, but this is really my first big movie, and this is my first real party, and I didn’t even know they were screening it, and I just found that out. I can’t wait until they screen it, to see my face on the side of a building. This is unbelievable. I’m just looking around in awe right now. This is so amazing. The [fake] sharks in the pool are incredible, and the shark balloons really made me laugh.

AX: Were you a fan of the original SHARKNADO?

PALMINTERI: Oh, I was a huge fan of SHARKNADO. Even before I got called in to do the second one, me and some friends were giant fans of the first one. We watched it all last summer. When I got called for SHARKNADO 2, I immediately called up all my friends – “You’ll never guess what I’m going in for!”

AX: You play the son of Mark McGrath’s character. Were you familiar with his band Sugar Ray?

PALMINTERI: I was such a huge fan of Sugar Ray, and then I found out that Mark McGrath was [playing] my father and I fangirled out a little bit when I saw it. I was such a big fan of his. I mean, I’ve listened to him for years. I’m such a huge fan of Nineties music and just being in a film with him was huge for me. He’s such an inspiration. Because I’m also a musician.

AX: What do you play?

PALMINTERI: I’m a singer and a guitar player, but I also play a little bit of piano, and I’m going to Berkley College of Music in the fall. And I told him, and we talked about music, because he’s an actor and a musician. He’s such an inspiration to me.

AX: You also have some scenes in the film with veteran actor Judd Hirsch. Did you know him from before, or was that your first time meeting him?

PALMINTERI: That was my first time meeting him. My parents were friends of his, but I didn’t know him. I watched him in a ton of movies, and meeting him was huge for me. I loved him. He was such a great guy. Everyone was [great].

AX: There are a lot of big, practical physical shots, but there was also a lot of CGI in SHARKNADO 2. What were some of the big physical things you got involved in here?

PALMINTERI: Oh. Definitely the cab scene, where we had to go on top of the cab and then swing off. That was amazing. And then we put the harness on and we swung in the green screen room. That was amazing. Those are probably two of the biggest physical things that we had to do. And they were so much fun. It was a blast, every second of it.

AX: Did you ever have a moment of fear imagining there were real sharks, or were you just having fun playing scared?

PALMINTERI: No, I wasn’t afraid. The whole movie was a blast to do. It was the most fun in the world.

AX: How is Anthony C. Ferrante as a director?

PALMINTERI: He’s one of the best guys I’ve ever met in my life. Like I said, this was my first movie, and he helped me so much, to get comfortable with the role. I could approach him and ask him questions and he helps me with everything. He’s really the best. I couldn’t imagine a better director.

AX: Is your dad on board with your choice to be in the arts?

PALMINTERI: Oh, yeah. He definitely helps me out. He’s made the mistakes, so he tries to steer me away from making those same mistakes. My mom, too – my mom’s big in the business, and if it wasn’t for my parents, I definitely would not be an actor.

AX: What else do you have coming up?

PALMINTERI: I have an album coming out pretty soon. First I have an EP. I have a song that’s going to be in the movie – it’s called “Eat Me,” it’s appropriate – so that’ll come out just after the film is released, so at the end of the summer, I’ll have a little EP, and then I’ll have a full album coming out.

AX: Do you have any backing on the album, or is it just you with a guitar?

PALMINTERI: There’s backing. There’s piano, there’s drums, there are some strings. There’s a little bit of everything on it, but the core of it is acoustic singer/songwriter kind of bluesy, jazzy style.

PALMINTERI: I don’t know yet. We’re still working on it – there are still a few songs that we have to finish before I record it, so it’s a mystery to me, but I’ll try my best to make it something great. I’m going to be in the mixing process, but I have my two great friends and co-writers, Mikhail and Nicholas, and they helped me tremendously with writing and producing. It’s really me and them and we’re just trying to make it, trying to make it the best we can.

AX: Is there anything else you’d like to say about SHARKNADO 2: THE SECOND ONE?