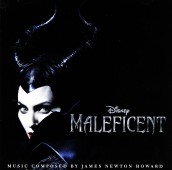 Genre films have always held a rewarding spell for James Newton Howard, an astonishingly adept, and prolific composer who from his first supernatural score to 1990s “Flatliners” has taken to the thematic majesty of a chorally-powered, symphonic orchestra to both horrifically dark and soaringly heroic effect – both emotional ends of which meet like never before in his magnificent MALIFICENT. For one of the best villain apologist fantasies in many a moon, Howard becomes a sorcerer’s apprentice as he unleashes Disney’s most infamous she-devil in all of her unexpectedly moving might.

While he’s accompanied lost civilizations (ATLANTIS), talking thunder lizards (DINOSAUR) and modern day legends (LADY IN THE WATER), it’s obvious that Howard’s similarly revisionist fairy tale take on SNOW WHITE AND THE HUNTSMAN landed him this gig. But while that movie’s godmother stayed evil, MALEFICENT’s far multi-dimensional nature allows Howard way more colors to play with, especially in a movie that isn’t so damn dour all of the time. For while MALEFICENT is just about as spectacularly set designed as SNOW WHITE, there’s a big, beating heart at work in it that really spruces up Howard’s inspiration – not that his HUNTSMAN score didn’t bring home the epic fantasy music bacon. Sympathy is the key to opening Maleficent’s hardened heart, as Howard does a marvelous job of musical storytelling, pouring on the rushing winds of joyful flight and a gossamer sense of pure innocence to set up a nice faerie girl’s fall from innocence – taken advantage of by romantically seductive music, and then outrightly savaged by kingly, pounding military might. These are bastards who deserve payback, and Howard delightfully goes the tote at the big coronation sequence, unexpectedly plunging into his pop background for a delicious montage of Maleficent assuming all of her iconically evil affectations. Pitting her droll, sinister music against the angelic purity of the film’s ersatz Cinderella, Howard achieves an often delightfully humorous contrast between unknowing, near-irritating happiness with a fearsomeness that would like to blast it out of the good girl. But damned if it can’t help but love her as well. Not only does Howard achieve tearfully moving affect with a solo piano as Malificent finally shows herself as a big softie, but also pounds out some of his most terrifically massive and exciting action music as the film ingeniously spins its variation on the climactic dragon battle, choral voices and brass ablaze for a virtuosic demonstration in mythic grrll power.

In an age when Hollywood seems a bit afraid to go for the sumptuous full-blast symphonic gusto, hearing Maleficent’s swing to The Force in all of her conflicted glory is a pure rush for fans who want to hear big, and boldly unapologetic music with a soft spot – much like the grand dame herself. The fact that we’re always on this faerie’s side for all of her mis-steps is a testament to just how much feeling a score of this dual nature can convey, its magic complemented with a tip of the flying crow to the 1959s signature villain theme – secure in the ironic glee that Howard has helped make her nothing of the sort, all while making us fall in love with fantastical scoring at its most deliciously brazen. Complementing his score’s wicked revisionism is Lana Del Rey’s near channeling of Diamanda Galas for “Once Upon A Dream,” giving beautifully creepy weight to a once carefree song. How I’d love to hear her take on “It’s a Small World After All” after hearing this.

Click on the link to Purchase the MALEFICENT soundtrack