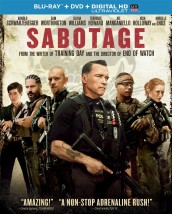 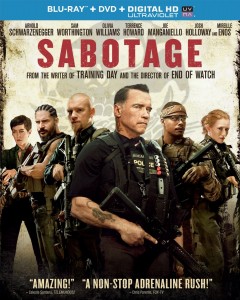 SABOTAGE – A star studded action flick starring a less-than heroic Arnold Schwarzenegger as a leader of a lethal DEA task force that tries to steal $10 million from a South American cartel after they raid the place. But after the money goes missing, the team suddenly comes under attack from the cartel and are being picked off one by one. Mix in a group of FBI investigators trying to pin down what’s really happening and their belief that maybe one of the task member is actually doing the killings and it turns into a bit of cat and mouse with balls out action. With Schwarzenegger, Sam Worthington, Terrence Howard, Joe Manganiello, Josh Holloway and Mireille Enos in the cast it is a pretty big movie with a variety of good plot points involving the past of the group and how they really are not the heroes that we like to think those fighting the war on drugs are supposed to be. In the post-Governator world, Schwarzenegger continues to prove that he has the star power to carry a movie and make it good and seems to be choosing the right vehicles for being an old action star. Worth checking out. 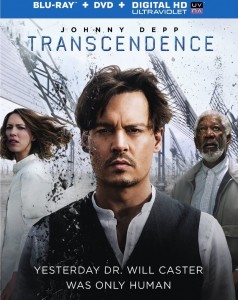 TRANSCENDENCE – TRANSCENDENCE plays as one of those movies that teaches us that too-much technology can lead to bad things – like Skynet and Hal 9000 and Johnny-5. Or maybe it does. Maybe it teaches us that technology is right all along and we are fools for believing it could ever be bad. Yeah, TRANSCENDENCE gets a little too convoluted for itself. First we are introduced to Johnny Depp’s character who is a scientist following a path of nano science and the joys of the Internet. Well, when anti-technology dudes kill him, his wife uploads him to the Internet where he takes tweeting and liking on Facebook to a whole new level by creating an army of half nano-human people and begins making plans to turn all of the humanity that way. Of course, this doesn’t sit well with a lot of people and they take up arms against him and his nano minions leading to an anti-climax for the ages and a “twist” that everyone could see coming. Did anyone see this movie in the theater? Seems like it was just in there and now on video. After watching it, I know why. 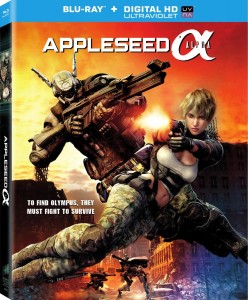 APPLESEED: ALPHA – When the original FINAL FANTASY came out it was a marvel of modern animation and technology. Despite the storyline, voiceovers and accuracy to the mythology of the video games, the animation blew away anything we had ever seen at the time. Fast forward to 2014, the type of animation we saw in FINAL FANTASY is fairly commonplace among anime and Pixar has revolutionized the way we look at kid’s movies. APPLESEED: ALPHA has some truly amazing animation with some action sequences that really marvel those of live action films. The plot follows a pair of mercenaries that get caught up in a global conflict where two cyborgs are trying to destroy a ginormous battle mech before a group of bad guys can get hold of it and bring the rest of the planet – already in ruins from years of war – to its knees. Plotline isn’t that original or amazing but the animation is impressive and really something to be seen in high definition. 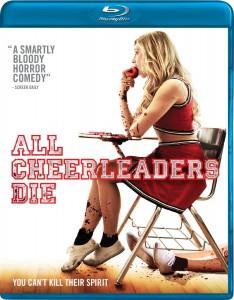 ALL CHEERLEADERS DIE – A pretty good twist on the whole teen horror genre with a tale that isn’t a serial killer flick or a monster movie but a supernatural flick about a group of cheerleaders that are killed in a car wreck after being chased by reckless football players. Luckily a Wiccan lesbian outcast is nearby and resurrects the girls with her weird stones she always carries around. The only problem is that now the girls have a blood lust – literally- as they are forced to feed on the blood of others in order to survive. The other problem is that they are all tied together meaning if one feeds they all feel it or if one has sex they all feel it. Add to this that a pair of sister cheerleaders’ bodies get “switched” leading to a number of awkward situations among boyfriends and popularity. ALL CHEERLEADERS DIE is a smart film. But it is also a brutally violent and humorous film as well that doesn’t take itself that serious to the point where it understands this is a camp film while trying to provide some nasty violence as well. With a slew of hot babes and gallons of blood being spilled it is definitely worth your time checking out either on VOD or on video. 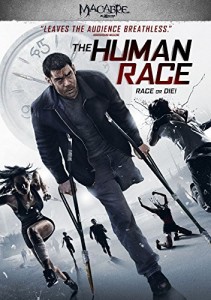 THE HUMAN RACE – This is an interesting horror/science fiction flick about a random group of people in a random city that get transported to a weird Earth-like place where they are told they have to keep running along a dedicated path. If you go off the path, you die. If you get lapped twice by someone, you die. If you do anything but run along the path, you die. After some feeling out (meaning people that go on the grass or go off course and are instantly killed) the remaining other 70 or so people start racing – and it runs the gamut of old people, kids, out of shape people. But one kick ass army vet with one leg is the guy to watch as he not only has compassion for some of the other people but can actually kick ass when need be. While the storyline is not complex and you can see where the twist is going as the movie goes on, it is enjoyable from a pure horror/action perspective and not dull in any way. Worth checking out if you are into indie horror flicks with a slightly original plotline.