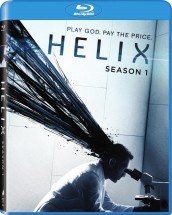 Also reviewed: THE FINAL TERROR, SCAVENGER KILLERS and NO VACANCY 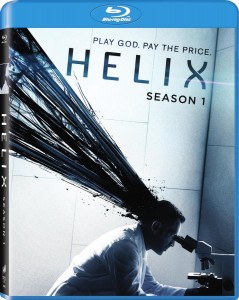 HELIX: SEASON ONE – SyFy has had its fair share of winners and losers over the years with a number of interesting titles coming along but also some really bad garbage. HELIX definitely falls in the winner category. A tense, claustrophobic science fiction horror flick centering on a group of scientists in a remote facility in Antarctica developing super germs and cures for the worst mankind has to offer, even coming up with new, nasty ones on the side. When an experimental drug is set loose on the population of the facility, turning those infected into wild beasts that only want to infect others with the disease, the CDC is called in to deal with the problem. But when they get there it is one secret after another that needs to be exposed before the real threat is dealt with and none of the CDC members are immune to bad things happening to them. HELIX: SEASON ONE does a great job of keeping the secrets at bay until they need to be uncovered as well as keeping the true friends from foes a mystery until the finale – even then it is unclear for some of the characters. Hopefully, Season Two won’t be too much of a detour from what they already established but it could have a move corporate, global feel compared to the cramped, single-platform they used to begin the series. If you missed it, now is a great chance to catch up in high definition. 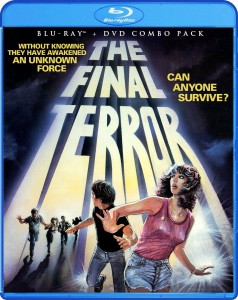 THE FINAL TERROR – A different type of slasher from the salad days in the early 1980s that begins pretty typical. A group of young twentysomethings travel to a remote forest for camping only to get attacked by a faceless, blood-crazed killer. The difference here is that about halfway into the movie the group – which still number at about nine or 10 people – discovers they are being attacked and they must all band together in order to escape what’s going on.  What follows is part escape from the woods, part LORD OF THE FLIES, part camouflage killer always one step ahead of the group. It is an interesting twist on the genre if you haven’t seen it before – for some reason THE FINAL TERROR escaped my viewing, which is very surprising given I thought I had seen every slasher good, bad or downright terrible known to mankind from the era. This is another gem from Scream Factory that continues to put out the good stuff regardless of the time of year and give people a chance to see old flicks in high def for the first time. 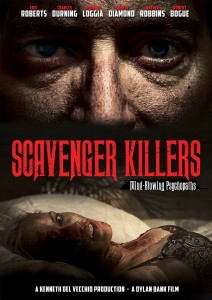 SCAVENGER KILLERS – File this under the low budget NATURAL BORN KILLERS rip-offs but with a decent enough twist involving a psycho judge and an equally deranged attorney that get their rocks off by maiming and killing people. Now granted they don’t necessarily kill the innocent as they seem to be equal opportunity killers – taking out a doctor that performs late term abortions or someone that gets off on a felony. Still, they do take care of some innocent people just for the sake of it including a trio of singers that get stripped down and are terrorized for a good deal of time in one of the more arousing scenes in the film. All throughout this, the two take sexual depravity to a whole new level and it becomes a bit unsettling after a while. I mean how many times can you see one dude jerk off or a couple roll around in blood getting in on. Gets a bit tedious to say the least. Still, there are some decent enough deaths in this that it makes it worthwhile and, of course, there is the three singers nude scene. Might be worth checking out on Netflix. 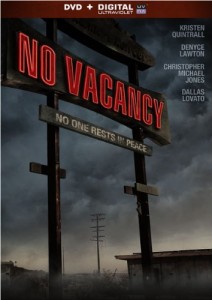 NO VACANCY – A pretty decent horror flick here that while it lacks originality, delivers some decent terror and kills. The setting is a group of twentysomethings get stranded in a remote part of the country and make their way to a bar/motel where the workers are extremely friendly. Way too friendly, offering room board, free drinks and free car work. Never accept anything free. Of course, the ulterior motive is to make them suffer for the sake of their own enjoyment. The group of seven are drugged, tied up and forced to watch their friends die in horrible ways one after the other. Of course, it wouldn’t be a horror film without a few of them breaking loose and messing up the plans. That’s where NO VACANCY goes from a purely torture-filled flick to a decent high tension movie but one alas filled with terrible decisions made by those involved. Luckily, these bad decisions aren’t enough to detract from some good horror that is well placed and with some really good production values. Worth checking out indeed.