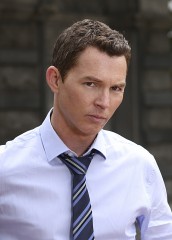 The actor also talks about the end of SOUTHLAND 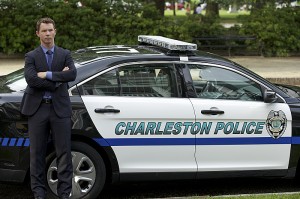 In CBS’ new drama series RECKLESS, Sundays at 9 PM, scandal rips through Charleston, South Carolina. When a (possibly nonconsensual) sex tape involving a number of police officers – multiple men with one woman (Georgina Haig) – surfaces, it leads to a firing, a lawsuit and a clash between a Yankee plaintiff lawyer (Anna Wood) and an aspiring politician representing the police department’s interests (Cam Gigadet).

Shawn Hatosy (pronounced HAT-oh-see) plays Terry McCandless, the officer who is the evident ringleader in what’s happening on the tape. Hatosy is no stranger to playing law enforcement personnel – he starred in five seasons of the acclaimed LAPD drama SOUTHLAND as Det. Sammy Bryant. Hatosy, a native of Maryland, began his professional acting career at age twenty in an episode of HOMICIDE: LIFE ON THE STREET. Major roles in more television and in feature films, including THE FACULTY, THE COOLER and ALPHA DOG, followed.

Hatosy is at a press event held by CBS for its summer series, where he obligingly discusses both RECKLESS and the end of SOUTHLAND.

ASSIGNMENT X: Were you looking to play a more morally ambiguous character following the fairly upright Sammy in SOUTHLAND?

SHAWN HATOSY: This came along – it was so different. I mean, I know he’s a cop, but whereas SOUTHLAND is ninety percent on the job and then ten percent in their personal life, for me, RECKLESS is the opposite. It’s like ninety percent personal, because it’s about my case, the sexual harassment case, and then ten percent on the job. It’s not as much a procedural. So that’s kind of cool. The word “soap” [was used to describe RECKLESS], which I don’t generally like, but it is. I mean, it ends up being that kind of push and pull between the complex relationships.

AX: Are you comfortable with the overt sexuality on the show, where you’re actually in close physical proximity to your scene partner in a way that you weren’t in SOUTHLAND?

HATOSY: Yeah. I mean, it’s definitely something that I’m not used to. You become more accustomed to it. It’s awkward. Some people, I’m sure, are very excited about that kind of thing, but me – mostly, what I hear is, guys are the ones who struggle more than women [laughs] with those kinds of scenes. But there’s a lot of that in this show, especially with my character. Even after the pilot, it goes on, and the relationships continue to spiral out of control.

AX: In Terry’s mind, is what’s going on with Lee Anne consensual, or does he even care?

HATOSY: He loves Lee Ann. That’s the one thing I see in Terry is, he truly loves her. And the system he uses to try to get her is not the most honest or productive or morally correct, but he really does love her. And I think that’s what you really learn about him during the thirteen episodes.

AX: Do we learn why he made that videotape? What does he think about sharing Lee Anne with however many guys there are on that tape?

HATOSY: Well, it’s the kind of thing where nothing is as it seems, and once you think you know what is being presented to you, the bottom falls out and you have to look at it from a different point of view.

AX: How is it working in South Carolina?

HATOSY: Charleston is the oldest city in South Carolina, it’s rich in history, the architecture is well-preserved, the people are mannerly. So aesthetically, you can’t argue the merits of filming there. The camera loves it, just like it loves Cam and Adam [Rodriguez, who plays Preston Cruz] and Anna. It’s in perfect line with what kind of story we’re trying to tell.

AX: You’ve said when you’re not filming, you’ve found yourself politically at odds with the more conservative locals on occasion …

HATOSY: I’ll put it this way [laughs]. I was in a hotel. My parents were there during the pilot. We were playing cards. None of us were drinking – we don’t drink. And the hotel bartender came out and said, “The rules are, you’re not allowed to play games or cards or gamble or any of that stuff.” We said, “We’re just playing Go Fish.” And he was like, “These are the rules and they’ve been that way since …” So it’s like this system that is really not ready to adapt – although I think since then they’ve changed that rule. But it’s like twenty years too late. And why did it remain? It’s that kind of world which [Anna Wood’s lawyer character] Jamie is finding herself in and up against this mentality.

AX: Your costar Anna Wood is actually from that region of the country. Have you gone to her for any kind of help with the local dialect?

HATOSY: That’s a rabbit hole. [If] you go to her, then she becomes the guru. I think the goal was to just stay consistent. They didn’t really want us to be overtly Southern, because I think it could be distracting, so [does accent] we just took a little bit, just sort of had a lull, and it just became sort of this. [regular speaking voice] For most of us, anyways. It was more of a generic dialect, as opposed to true, authentic Charleston, which is very different.

AX: Because RECKLESS is a fairly glossy-looking show, do you spend more time in hair and makeup than you do on SOUTHLAND?

HATOSY: Not me. The women, definitely, but the guys – they powder us, they cover up the spots, they cut our hair. That’s about it.

AX: Can we talk about the cancellation of SOUTHLAND?

HATOSY: It was one of those shows that could only exist in the time that it could exist in. It was never easy; it was always a struggle to get it out there.

AX: Did you know where Sammy would have gone had there been a Season 6?

HATOSY: Very clearly, Sammy and the rest of the cast were all killed with shotguns by the DUCK DYNASTY cast [laughs]. No, I always liked to figure that Sammy continued as someone like Ben [played by Ben McKenzie], and because it didn’t work out – I think he really saw himself as this mentor-type character and he blew it with Ben, so I think that for him, he would go along the path of Cooper [played by Michael Cudlitz], to be that sergeant who could take a guy to the next level.

HATOSY: Minus the painkillers, because I think Cooper was just the greatest. If you’re a Ben type, where you’re vacillating between going to the dark side or going to the good side, Ben clearly is going to the wrong side, but as he makes these decisions, he keeps going up and ranking up and ranking up. A guy like Cooper, who’s by the book, ends up committing suicide, essentially. I think it’s fascinating. So for me, to see what Sammy would then do, given all those circumstances, hopefully, he comes out of it the right way. But the best way to tell a story is to keep challenging the characters and see what kind of decisions they make.

HATOSY: Just RECKLESS [and] a little independent film called MEDICINE MEN at the moment, which is a very cool little movie I’m excited about.