The latest season is filled with more mythology and the Berserkers 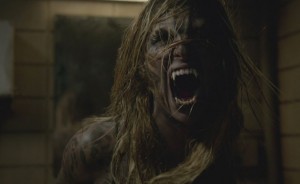 As the second episode of Season 4 of TEEN WOLF kicks into gear, the series has a ton of explaining to do, not to mention loads of exposition that will set into motion the Big Bads this year.

Following last week’s season premiere, Scott (Tyler Posey) and his friends have discovered the missing Derek (Tyler Hoechlin) in Mexico, except for the weird problem that he has been aged backward by former Hunter turned vengeful werewolf Kate (Jill Wagner).

What they discover is Kate needed to have Derek trust her again and the only time that happened was when he was younger. It appears that Scott isn’t the only werewolf that fell in love with Hunter.

Kate is after some kind of amulet in the Hale “vault” which is conveniently located underneath the school.

Toss is the Berserkers from Mexico and some fresh team building courtesy of new regulars Malia (Shelley Hennig) and Kira (Arden Cho) and TEEN WOLF is back on track. After the death of Allison (Crystal Reed) at the end of Season 3, it was a question mark how the show could recover, but thankfully the Malia and Kira characters were seeded throughout Season 3 and have stepped up to full time cast members with ease.

The Malia/Stiles (Dylan O’Brien) is particularly endearing and it’s going to be fun to see that develop.

The series also provides requisite chills throughout and Kate is shaping up to be one of the scariest looking werewolves yet. And with both Hunter and werewolf blood running through her veins, if the show plays its cards right, she could very turn into one of the greatest Big Bads the series has had to date.

Thankfully, four seasons in, the rest of the world is discovering the magic of TEEN WOLF. Like BUFFY THE VAMPIRE SLAYER, it was a title that has the potential to turn people off, but once they get suckered into the universe, they’re here to say. The series keeps adjusting and evolving and it keeps getting bigger and better with each season.