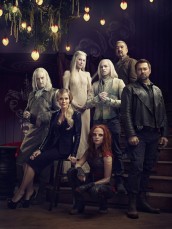 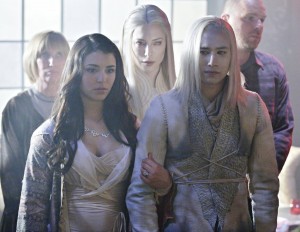 In Season 2 of Syfy’s DEFIANCE, Thursdays at 8 PM, things have only heated up in the town of the title. It’s been three-and-a-half decades since seven different species of aliens, collectively called the Votan, landed on Earth. Integration with the human population – and each other – is still a work in sometimes violent progress.

DEFIANCE co-executive producer/director Michael Nankin, who previously worked with DEFIANCE executive producer/show runner Kevin Murphy when they were both on BATTLESTAR GALACTICA and CAPRICA, is at a Syfy party for the Television Critics Association. He talks about the challenges of making credible, character-based but effects-laden science fiction for television.

ASSIGNMENT X: How did you find your way onto DEFIANCE?

MICHAEL NANKIN: The executives at Syfy called me and asked me if I would come and talk to them about directing the pilot, which I did, which I wasn’t hired for, and I thought that was the end of that, and then they came back several months later and they asked me to be the directing producer of the show.

AX: Are you the person who makes the determination of what’s shot practically and what’s going to be green screen?

NANKIN: I’m part of the team that decides that, because there are budgetary considerations, there are creative considerations. So between the writers, the production designer and me and the people who hold the purse strings, those decisions are made. What we’ve found is that anything that required an enormous amount of scope, which was too expensive to build, became CGI.

AX: Well, you have a real forest –

AX: You have real roads …

AX: But then when you had a battle on a mountainside, that was a green screen.

AX: Was it just too expensive to get the cast, crew and equipment up a real mountainside?

NANKIN: There wasn’t anything that existed that looked right. There’s a very specific story about the fact that they march down this long pass and there are cliffs on either side. That just didn’t exist.

AX: Had you ever done this much green screen before?

NANKIN: No. This is the most I’ve ever done. I’ve done a lot – I worked on BATTLESTAR GALACTICA and CAPRICA and FLASHFORWARD, so I’m well-versed in green screen, but the amount that we did – we did entire green screen environments, where all that we built was the floor, for several episodes.

AX: Not only are you lighting the normal range of human skin tones, you’ve got a bunch of skin tones on the different species of Votan that don’t exist in the real world. Did you and your d.p. ever go through, “God, how do we get everybody in this scene the right tone”?

NANKIN: Every day. Well, what we found was that we had to be careful with the Castithans. Castithans are essentially albinos. And their white makeup was very reflective. So what we found was, if there was any colored light anywhere near them, their face would become that color. If there was an amber light, they wouldn’t look white any more, they would look amber. If there was a green light, they would look green. So we had to keep all colored lights off them, and they were only hit with white light. And then we also enhance it in post.

AX: What about the Indogenes? They look very complicated.

NANKIN: They weren’t as bad, because they’re basically rubber. Those are rubber masks, which are more controllable than the white makeup on the skin.

AX: Do you have a favorite alien species to shoot?

NANKIN: My favorite alien species to shoot are the Irathients, because they’re completely unpredictable and their behavior is more like animals than like humans, and they’re not as in control of themselves.

AX: What is the most challenging aspect of this? You’re juggling so many different balls – is there one ball that’s slipperier than another?

NANKIN: It’s a show with a lot of moving parts and a rather tight budget and a rather tight schedule. And there wasn’t any one thing that stood out, but we had put ourselves in the position where nothing could go wrong. Every makeup had to be done on time, the lenses had to be correct, the sets had to be ready – we had an enormous amount of organization and a lot of luck and if one piece failed, it was a disaster.

AX: Kevin Murphy has said that something happened where you said, “Look, put me in the box, cut my money, cut my time, I will make it fabulous.” What prompted that?

NANKIN: [laughs] Well, I’ll give you my version of that, which was, I didn’t have to say, “Cut my money, cut my time” – that was being done for me. But what I found was that I started the process in our prep resistant to the constraints that we had. And I had to teach myself to love the constraints that we had. And also, what was happening a lot of times in the early part of the project, I called myself “the antiabortionist,” where there would be something very expensive in the script, and the budget would not cover it, and everyone would say, “Well, let’s take this out,” and I would be the one saying, “No, no, no, wait, give me a day and let me think about it. When I get back, I may be able to do this for thirty dollars of groceries. Maybe we’ll go to the butcher shop and get something, or maybe go on Craigslist and find something. Let me have a day to see if I can do it cheaply before we cut it.” And that was fun.

AX: You’d worked with executive producer/show runner Kevin Murphy on BATTLESTAR and CAPRICA. Do you work together the same way you did on those other shows, or is it different now because he’s the show runner?

NANKIN: No, it’s pretty much the same. Once you get a working relationship with someone – I mean, it’s so delightful with Kevin. He’s a great show runner.

NANKIN: We do. I mean, you always come up with similarities to other shows. We’re always trying to push away from anything else.

AX: Do you have a resident geek who tells you, “Change the nose on that so it doesn’t resemble this other thing on this other show …”?

NANKIN: Well, that was all discussed in the design phase. Our resident geek is David [J. Peterson], our language guy.

AX: He’s the one who created all the other languages on GAME OF THRONES …

NANKIN: As a geek, he created multiple languages, alphabets, history, religion. On the set, we were creating a lot of the culture. How do Castithans shake hands? How do they indicate their status? There’s an enormous amount of detail. We’re all resident geeks.

AX: How do Castithans shake hands or kiss without smudging their makeup?

AX: Do you have a preference between the intimate people scenes and the big action scenes?

AX: Do you sit down with the writers and discuss, “Okay, what’s the tone of this scene going to be?”

NANKIN: I weigh in – they hear from me a lot. I’m in Toronto [where DEFIANCE is shot], they’re here in L.A. I’ll read notes, I’ll read outlines – they hear from me at every stage. So by the time the script comes out, we’ve talked about it quite a bit. And then just before production, Kevin and I and the director of the episode, if it’s not me, will have what’s called a tone meeting. It’s about what’s underneath all the scenes, the intent.

AX: Were there any things you changed, because you had to go in and say, “Guys, this will take five years to shoot”?

NANKIN: Yeah. We tried to never be cheesy. So if there was something that was too big for us, and we couldn’t pull it off with excellence, we wouldn’t do it. We’d do something smaller that we could do really well, rather than do a cheap, cheesy version of something.

AX: What would you most like people to know about DEFIANCE?

NANKIN: It’s smarter and better than you might think it is.