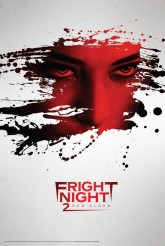 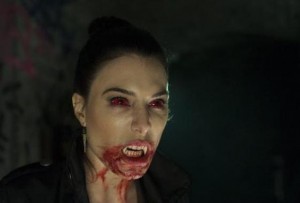 Jaime Murray has made a habit of playing strong female characters. Just look at what she brought to the table as Stahma Tarr in DEFIANCE.

Now she’s chomping at the bit to bite into the vampire realm in her new role as Gerri Dandridge in the upcoming FRIGHT NIGHT 2: NEW BLOOD.

Murray sat down to chat with ASSIGNMENT X about her the movie and what to expect from her character.

ASSIGNMENT X: So tell me about Gerri Dandridge and her take in the film?

JAIME MURRAY: I play a serious professor teaching at a Romanian university. Charlie, Amy and Evil are studying there in Romania and everyone apart from Charlie is taken with Gerri. When Charlie starts to investigate her, things get a little bloody.

AX: As this is not a sequel to the remake but another reboot, tell me how this differs from what we have already seen.

MURRAY: The FRIGHT NIGHT franchise is at its core horror and comedy and you will see plenty of that here. We didn’t want to retell the same story so we came up with ways that we could make it different. Obvioulsy, I’m a woman and Charlie being a boy there is an obvious connection. We also put a lot of emphasis on the whole culture of the vampire myth and what we have seen previously in other films and legends.

AX: Does this take any cues from the original FRIGHT NIGHT 2 that also featured a female vampire?

MURRAY: Well, it is a completely separate story. We wanted to do fresh ideas instead of retelling what had already come before. We filmed in Romania and that’s where the movie takes place so there is this whole very gothic feel that’s equally creepy as it is beautiful. We also introduce the idea that Gerri may have originally been Elizabeth Bathory, which is a pretty fun twist on her legend as well.AX: You have a lot of strong female characters under your belt, are you equally as strong in real life?

MURRAY: Well, I’m not a little door mouse. I like authentic and interesting people in my social and private life and I like to play interesting and strong characters when I am working as well. I enjoy playing these characters that are strong and eccentric.