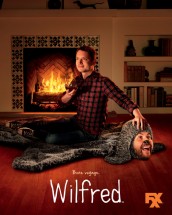 Okay, so that wasn’t Wilfred’s fault … or was it? 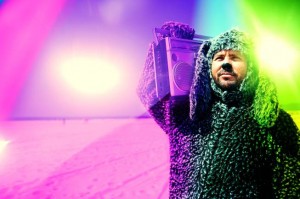 WILFRED has moved to a new network – FX’s sister channel FXX – for its final season, but it’s up to its same old tricks, having us ask what the heck is going on.

Whether this was the intent all along or the show runners decided they’d gone a tennis ball too far at the end of last season, the Season 4 opener “Amends” backs off of the notion that Wilfred (Jason Gann) accidentally or deliberately killed the father (James Remar) of Ryan (Elijah Wood) with a tennis ball by the stairs.

“Amends” begins where the Season 3 finale “Regrets” ends, with Ryan finding a strange stone carving of Wilfred in a yard. Ryan is then accosted by three menacing Wilfreds, runs into a barn, finds the “real” Wilfred up in the loft – and then “real” Wilfred pushes Ryan off toward the menacing Wilfs.

And then Ryan wakes up to Wilfred worrying over him. It’s Ryan who has slipped on the tennis ball and fallen down the stairs, not his father – none of that happened.

Ryan is relieved – so relieved, in fact, that when his father shows up at the door, Ryan immediately agrees to take the job his dad offers him, but also makes Wilfred leave.

Wilfred, of course, is anxious to resume his friendship with Ryan. He eventually badgers Ryan into going out with him – and they encounter three Wilfreds. Actually, they encounter three kids dressed up in Wilfred suits. When Ryan asks what’s going on, the kids say they’re affiliated with a cult that worshipped a dog/man, which has a statue that looks like the one Ryan saw in his dream.

Wilfred says Ryan must have precognition, as various things in the dream come true. Ryan’s father calls him up, angry that Ryan left work to go off with Wilfred. How did Ryan’s dad know that? Ryan’s father dies in a car accident, further proof that Ryan’s dream was prophetic. When Ryan wonders what it’s all for, though, Wilfred points out that having the dream gave Ryan the time and motivation to make things up with his father in real life. The only thing that hasn’t come true from the dream is that Wilfred betrayed Ryan …

Except that when Wilfred’s alone with Ryan’s dad’s phone, Wilfred checks out a photo. It shows Wilfred and Ryan in Ryan’s car with the caption, “You’ll never stop me!” Wilfred sent this to Ryan’s father, which caused the panic and possibly the car accident.

There are so many tangled meta-issues here – if Wilfred is just a dog, how can he do things like send photos, and if he’s not just a dog, why does Ryan not notice how Wilfred is able to do human things, and if he’s just Ryan’s id, why does no one else notice what Ryan is doing? – that a chart or a graph is necessary at this point to begin to keep track of all the contradictory clues. This wouldn’t matter so much if Ryan and Wilfred weren’t trying to find out what it all means, but since they are, it seems like they ought to be asking a few questions that have occurred to the viewers.

The episode has its great moments – the trio in the Wilfred suits is a highlight – and no real low points. “Amends” is a decent WILFRED episode, not astonishing but watchable enough.