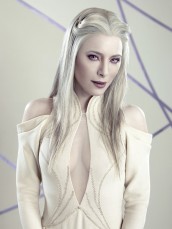 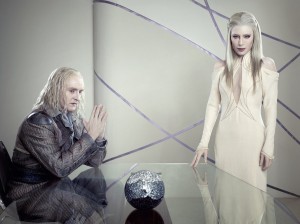 We’re only at the start of Season 2 of Syfy’s DEFIANCE, returning Thursday June 19, but Jaime Murray’s character Stahma Tarr has already established herself as one of the more formidable antagonists of either gender in science fiction. In DEFIANCE, it’s thirty-five years after seven alien races, collectively known as the Votan, crash-landed on Earth. One of these species is the Castithan, a caste-and-status-conscious group. Stahma is a highborn Castithan who married Datak Tarr, played by Tony Curran, who has risen to prominence in the town of Defiance, formerly St. Louis,MO. Stahma plays the respectful wife, but she shamelessly manipulates her proud spouse, her adoring son and anyone else who can’t see through her mask of propriety. She’s killed to maintain her family and position, even murdering her lover when it seemed she might be compromised. Now that Datak has been arrested for killing an unpleasant human, Stahma may take on some of her husband’s responsibilities, putting a humble front on great ambition.

Genre roles are nothing new to British actress Murray, who has played H.G. Wells on Syfy’s WAREHOUSE 13, the vampire Gerri Dandridge in FRIGHT NIGHT 2, Dexter’s pyromaniac paramour on Season 2 of DEXTER and Gaia in SPARTACUS: GODS OF THE ARENA. However, Stahma Tarr is the first role that has required the London-born Murray to be made up in Castithan white and speak the Castithan language, invented (like the other Votan tongues) by DEFIANCE consultant David J. Peterson.

At a press event held by Syfy for DEFIANCE,Murray talks about playing the outwardly sweet but extremely stealthy Stahma.

ASSIGNMENT X: Have you played characters like Stahma before? You played sort of manipulative people in WAREHOUSE 13 and DEXTER and SPARTACUS, but those seem to have been a little more high-key in their manipulation. Is it fun to play somebody who’s a little more subtle?

JAIME MURRAY: It’s interesting. I suppose Gaia in SPARTACUS was living within a patriarchal world, but she had rebelled against it so fully, whereas [as Stahma] I’m living within a male/female relationship from a culture with a very strict patriarchal history and tradition, and so often, you can only repress somebody so much before their character or their spirit might try to find other ways of achieving their objective. So Stahma definitely has to go sideways about it – actually, I had a lot of empathy for her as a woman, not just a woman – she’s the smartest person in the room sometimes, but she can’t just come out and be straightforward with her husband and be his partner in that way. She has to manipulate him into thinking that it’s his idea and suggest it in a way which doesn’t injure his male pride. So it’s an interesting role to play.

AX: Does she sincerely want to keep the peace? For instance, in the pilot, she talks Datak out of killing an innocent kid. How much is that her desire to protect the kid, if that desire exists, and how much is it her desire to get the Macauley mine into the Tarr family’s hands?

MURRAY: Oh, I can’t give that away [laughs]. That’s a journey that I’m excited to be exploring and I don’t want to give that answer necessarily, because I would like you to be watching it and wondering what it is that’s motivating her and is she being sweet and kind in that moment, or is that the art of her manipulation, or is she misunderstood? So I’ll let that question be for now.

AX: You look very different as Stahma. Are you wearing prosthetics at all, is any CGI involved in your look?

MURRAY: Well, I’m completely in makeup. Prosthetics is when you’re wearing pieces. They just paint me from head to toe. I’ve worn a lot of prosthetics before, so in some ways, I’m happy I’m not wearing prosthetics, because it involves glue and whatnot. They only thing I would say about being painted from head to toe is, poor Tony, who plays my husband, in a scene, he’ll try to touch my face or something, and I’m like, “Don’t touch the face,” because I leave little white imprints of my character everywhere I go [laughs].

AX: So you’re like Madeline Kahn in YOUNG FRANKENSTEIN. Do they leave breathing ports for your skin? I remember that was a plot point in GOLDFINGER – if someone is in full body makeup with nowhere for their pores to breathe, it can be dangerous.

MURRAY: The makeup is not like cellophane or anything like that, so you don’t have to do that so much, but when they make the masks of you in order to make the prosthetics, sometimes they’ll stick straws up your nose when they’re putting the plaster on your face.

AX: Does the makeup affect how you play Stahma?

MURRAY: Well, I was wearing a lot of large corsets and belts and long robes. I’ve always been very respectful of wardrobe and makeup and what that does for me, and because it is such a fragile makeup and I have to look after it so much, it kind of gave me a poise which I thought was interesting for the character anyway, so I just kind of used it and I decided, “Hey, that’s what a Castithan lady would do” [laughs].

AX: Are the contact lenses tough to work with?

MURRAY: I’ve had worse. I did a film where I actually wore full contacts. These contacts are very, very comfortable in comparison. There’s a very snakelike, reptilian look to me in this makeup with the eyes and again, I allowed that to inspire me and kind of send me off to another thing, which is otherworldly, the way she might move or the flick of the eyes when she’s nervous. So whatever challenges it presents, I try and use.

AX: What’s the movie you did with full contact lenses?

AX: Is this the first time you’ve played a literal vamp?

MURRAY: Yes, it’s my first literal vamp. It was interesting, because I was already using elements of that for this character [Stahma], and then in my process of looking up vampires, I was looking up Freudian and Jungian analysis of the vampire mythology, and any myth which is very popular is generally something which is going on in the collective consciousness, and I think that narcissism is very prevalent in our culture right now. In fact, you just have to turn on reality TV to see how it’s rewarded in our culture, and how empty that can be, and how people using other people for their own ends is really quite damaging and how it kind of sucks the life out of others.

AX: Back to DEFIANCE, a lot of times, aliens in American-made shows have British accents. You have an English accent in real life, but not as Stahma. Was it decided that because the aliens landed in America, the English-language accents they would learn would be American?

MURRAY: Well, first of all, there was a lot of conversation about, a lot of baddies are British, so I definitely didn’t want to do the British baddie, especially as I’ve done it before. My accent [as Stahma] is quite different from Tony’s accent [as Datak], because he learned the American language in the gutter and in the streets. I probably had it taught to me by a tutor and learnt it from a book. So my American – it will be slightly off, the way that I’m speaking, my stresses and my intonations. It is American, but it’s slightly stilted. It’s my second language, so it was fun to play with.

AX: There’s a massive multiplayer online game version of DEFIANCE that runs concurrent to the TV series, though the game and the show take place in different parts of the country. Are you as actors affected in what you’re doing by what Trion is doing with the game?

MURRAY: No, really,  it’s quite nice as an actor, because sometimes the mythology and certain structures have to be really thought through, rather than you asking questions and nobody really knows the answer. So the answers are more readily available to us. And sometimes you’ll do something, and they’ll go, “Well, you can’t do that because this, this and this in Episode Whatever.” So it’s always the given circumstances, but it’s nice, because people have really thought about the given circumstances.

AX: Is DEFIANCE more planned out than some other things you’ve been on? I would imagine for instance SPARTACUS, if for no other reason than because of the green screen, was pretty well-thought-out.

MURRAY: Yes, I’ve been really lucky to work on stuff where people are super-passionate. I’ve worked on some quite exotic projects, I think, and I think that that kind of instills – the people who are doing it, they’re not bored of it, they’re passionate about it, so it’s always been quite well-thought-out pieces.

AX: Is there anything else you’d like to say about DEFIANCE right now?

MURRAY: You know, there are lots of twists and turns to this plot, but it’s essentially a character-driven piece and it’s full of aspirations and hope and it’s fun. It’s a fun, rich world. It’s such a character-driven piece. And it’s layered and it’s rich and I’m excited about [it]. As an actor, sometimes I’ll watch what Tony Curran as Datak’s doing, and I’m like, “I frustrated that I can’t rage and throw my toys out of the car [the way Datak does]” and I’m having to wear the mask of being subservient and having to play this role, but I wonder,if maybe three seasons in, who knows where she’ll be? She might tell Datak to stick it where the sun won’t shine. I actually think that I played her more submissive than I’d even intended on doing, because I didn’t want her to be a character that I’d played before, but I feel as though it was a great starting point, because then it’s really going to cause them something when she really does rebel.