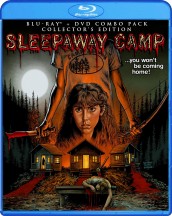 Great horror twists are hard to come by – especially back in the 1980s when slasher movies were all the rage and just about every trick imaginable was used up by the time FRIDAY THE 13th came along in 1980.

However, 1983’s SLEEPAWAY CAMP is notable for providing one of the most disturbing and unexpected twist endings in the history of the slasher genre (don’t worry, I won’t reveal it here, but chances are you already know what it is).

The film itself, is somewhat pedestrian at times – trying to mix in a little bit of the 1979 summer camp comedy classic MEATBALLS with traditional slasher tropes. So you get pranks, foul-mouthed teenagers and kids getting brutally murdered.

But strip all the conventions away that tie it to the period, it’s a film that actually breaks considerable ground. Not only does it tackle the concept of bullying in a semi-realistic way for its time, it also touches upon gender identity without any of it feeling exploitative.

The story follows Angela (Felissa Rose) a young girl traumatized by the death of her father during a boating accident and still trying to come to terms with it.  Attending camp with her cousin Ricky (Jonathan Tierston), she must come to terms with the fact that she’s way too introverted for the others around her. They don’t know of her past, but because of her quiet nature, she also becomes suspect #1 when her enemies start to turn up dead.

Felissa Rose gives a well-rounded performance, capturing innocence and creepy all wrapped up in one. She’s the reason you keep watching the film and hoping things will work out for her.

The graphic violence isn’t as gloriously over-the-top as other films of the era, but that’s okay. Writer-Director Robert Hiltzik delivers a well-made, suspenseful slasher film and keeps the ultimate twist at bay so when it finally happens, it’s a whopper for any die-hard horror fan.

SLEEPAWAY CAMP has never looked very good on its various VHS and DVD iterations, but this new 2K scan of the original negative restores it to its natural glory. It looks fantastic and is well-worth purchasing again just to see it come to life.

There are two commentaries, one with stars Rose and Tierston and an archival commentary with director/writer Hiltzik. A comprehensive new documentary is also featured with new interviews with the cast and crew, the theatrical trailer and the short film “Judy” by SLEEPAWAY CAMP webmaster Jeff Hayes who revisits the character of Judy from SLEEPAWAY CAMP 30 years later with Karen Fields reprising her role.

Once again Shout! Factory delivers with its 1980s horror movie reissues. SLEEPAWAY CAMP’s Blu-ray debut was long overdue and finally the movie can be seen the way it was meant to.