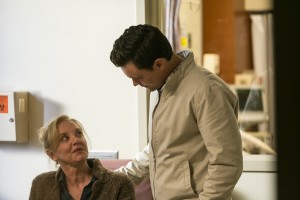 Sundance TV’s drama RECTIFY begins its second season Thursday, June 19. Season 1, which debuted last year, followed the first six days after Daniel Holden (Aden Young), who has spent literally half of his life on death row after being convicted of murdering his girlfriend at age nineteen, is released from prison on a technicality. Some of Daniel’s family is thrilled; most of the townsfolk are not, believing him to be guilty. The show starts slowly but builds to real power, with a shattering Season 1 climax, and we still don’t know whether or not Daniel committed the original crime. Season 1 was six episodes long; Season 2 is ten episodes long, with a slightly more expanded timeframe.

RECTIFY creator/show runner Ray McKinnon, at the Television Critics Association press tour to talk about the series during Sundance TV’s day at the event, takes some time to discuss what we may or may not be seeing this year.

ASSIGNMENT X: When in the life of RECTIFY did you know you had a second season?

AX: So you were already done with Season 1?

McKINNON: Yes. They didn’t tell us for awhile.

AX: Were your actors all contracted to come back if the series was picked up, or did you have to go around to everybody individually?

McKINNON: They were contracted. If we had a second season, they were obligated – or a lot of them are.

AX: When did you start planning for a second season?

McKINNON: I guess in the early fall. I did find out earlier, but I had other things I was dealing with, so I didn’t really start planning-planning until the early fall.

McKINNON: Ha-ha. Both of them are challenging. I think finding the story this year is the most challenging, as opposed to the time aspect of it. Just because we did it last year doesn’t mean it’s suddenly easy this year. It’s never easy.

AX: And was it easier or harder to work within the world of RECTIFY now that you’d invented it?

McKINNON: It was both. First of all, our schedule this year is more compressed, so we’re going to be writing as we’re producing the show, as we’re editing the show. It’s a little more like traditional television is made, so it’s more pressure, and that is what it is. But we have the main characters cast – we don’t have to do that again – and we have a lot of the locations, so that’s nice. But yeah, it’s hard to figure out – the first season was about his birth back in the world. Now we have to figure out new things that are hopefully interesting to an audience.

AX: Are any significant new people or elements coming into Season 2, or are we just deepening the situations between the people we’ve already met?

McKINNON: Well, we’re definitely deepening the situations and the ramifications of the first season. Some of the events that happened in first season continue to play out. As often in real life, they refuse to go away. There are some interesting ancillary characters like we had last year – we’ll have a new batch that hopefully will be interesting for folks.

AX: And do you have any other projects going on, or are you just full-time with RECTIFY?

McKINNON: Oh, it’s funny. I finally started having an acting career [McKinnon is also an actor], which is great, but right now, I’m telling everybody, “I’m sorry, I’m too busy on the show,” which is called “a quality problem” [laughs]. So maybe I’ll just have to put myself in the show so I can at least act some.

AX: Are you working on any other writing projects?

McKINNON: No, I’m in the [writers’] room every day, trying to figure out what to do with this crazy family that I’ve created.

AX: Are you writing towards an end point on RECTIFY, or could this just go on?

McKINNON: You know, that’s always a tough question. At some point, I do feel like it finds its own end, and if the network lets us continue to do so, then I think there’s a really good ending point for it.

AX: And what would you most like people to know about Season 2 of RECTIFY?

McKINNON: Oh, Lord. If you were a fan of Season 1, there will be more of the same and more of the different.