Home » Who is Killing the Great Chefs of Europe soundtrack review 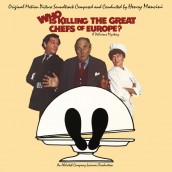 ©2014 Varese Sarabande Records
WHO IS KILLING THE GREAT CHEFS OF EUROPE? soundtrack
Reviews

CD Review: WHO IS KILLING THE GREAT CHEFS OF EUROPE? soundtrack (limited edition)

A delectable Henry Mancini score finally gets served on CD

All the dining metaphors in the world can’t do justice to Henry Mancini’s delicious mystery-comedy score for Ted Kotcheff’s equally delectable 1978 film that took cinematic food porn to new, mouth-watering heights. A composer who knew how to blend suspense, romance and humor with an escapist touch, Mancini starts the ovens rolling with a rollicking, Baroque theme that captures the pomp of haute culture. Eschewing “Pink Panther”-esque jazz in favor of a classical, continental approach, Mancini ooh’s-and-aah’s over the highly edible creations with perky brass and lush strings, while providing an unexpected melancholy bite in his love theme for Jacqueline Bisset’s chef and George Segal’s definitely not over her ex.

It’s music that recalls Mancini’s effervescent mix of attraction and playful Hitchcockian danger from SILVER STREAK just two years before, with the clever bombe plot musically coming to a symphonically suspenseful rhythmic boil for “The Final Feast,” followed by a heartbreaking requiem for how caloric deprivation can lead to a gastronomic body count. However the opposite couldn’t be truer for Mancini fans at the time of CHEFS release, as the vinyl album began a long-awaited era when the composer’s full scores were offered, as opposed to the recreations that had filled his past, though certainly pleasant soundtrack releases. Even then, you had to have a turntable for the past 33 years to enjoy CHEFS‘ music. Now this wonderful score now finally hits CD as the auspicious premiere release of Varese’s Sarabande’s Vintage Soundtracks label, which will hopefully be serving the many worthy titles deserving of the digital age. But for the moment, this piece of Mancini mignon couldn’t be more welcome.

Article Source: Assignment X
Article: CD Review of  the WHO IS KILLING THE GREAT CHEFS OF EUROPE soundtrack