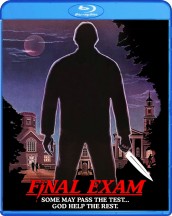 A flawed but tolerable 1980s slasher film that gets an overdue facelift from Shout! Factory

Supply and demand for slasher flicks fueled the early 1980s as every low budget production company wanted to get into the horror movie genre. They were cheap to make, didn’t need stars and audiences ate them up. You also didn’t have to be a studio to make bank on these films.

Written and directed by Jimmy Huston, FINAL EXAM is definitely an odd duck amongst many 1980s slashers because it’s not interested in the rules per se. At times, FINAL EXAM wants to be a carefree ANIMAL HOUSE-lite rip-off, other times it wants to be a sensitive teen drama and the rest of the time it’s a lukewarm slasher with a mysterious killer taking people out with Jason Voorhees-like efficiency.

The film begins with a solid opening set-piece with a young couple making out in a car and getting dispatched by the film’s knife wielding killer. It’s well orchestrated and the pay-off is impressive.

After this teaser, the movie jumps a few days later over to Lanier College where the students are facing final exams. We get a whole gaggle of random teenagers – the good girl, the jock, the John Belushi wannabe, the sexpot, and a few other random road kill.

The first hour really feels like Huston wanted to make ANIMAL HOUSE, but didn’t have the comedic chops to pull it off. Ralph Brown who plays Wildman in the film brings some energy to his role, trying hard to be edgy and Belushi-like. And for the most part this works.

His best friend at the Gamma Delta fraternity is Mark (John Fallon) who strangely friends with the nerd/geek Radish (Joel S. Rice) – or tolerates him. Pranks ensue, a Pledge named Gary (Terry W. Farren) is tied to a tree, whipped creamed and hazed only to die shortly thereafter.

The rest of the film finds good girl Courtney (Cecile Bagdadi) talking about her insecurities and also finding a budding (yet unfulfilled) romance with Radish.

Soon, the killer strikes and he systematically (and in less than 25 minutes) dispatches the rest of the cast.

There’s some good suspense and kills, though FINAL EXAM makes a huge mistake in showing the killer’s face all too clearly throughout the remainder of the movie. There’s no mystery as to who the killer is at this point, which can be viewed as either incredibly deconstructive or just sloppy. Usually in films of this nature, there’s a big twist that “so and so is the killer.” This movie makes the killer random, somewhat indestructible and an unknown factor – much like the far more successful 1970s slasher film BLACK CHRISTMAS, but you also see him, which neuters him considerably, especially since he’s just an average Joe. No deformed or burned face or anything.

The character development in the film wouldn’t have been so bad if the actors were a little more polished and engaging. It’s clearly a group of first-timers and while they do an adequate job, all the chatty-cathy nature of the dialogue gets a bit draggy throughout because they can’t rise about the material.

The film also lacks any real gore. There’s some moody set pieces, but it’s not a wall to wall gorefest that it could be. Still, Huston does deliver a couple of solid chills and there’s a nice pay-off with a cafeteria food conveyor belt.

Compared to many recent horror films, there’s still a quaint charm to FINAL EXAM that makes it worth checking out for its antiquated ideas about college life, hazing and safety (one prank would never be washed under the rug today like it is in the film).

The Shout! Factory transfer is great and really improves on the previous Code Red DVD release. Three mini-interviews with actors Rice, Bagdadi and Sherry Willis-Burch ported over from the previous DVD release shed some light on how the actors got the parts, though it would have been nice to at least have still photography shots of what they looked like in the film during their interviews, so you didn’t have to scour through the film to figure out who is who. They also provide the film with its sole audio commentary. A trailer rounds out the disc.

Another cool find by Shout! Factory who keep making 1980s babies happy with their loving attention to these classic and not-so-classic flicks. It’s the early 1980s all over again, and frankly I couldn’t be more thrilled.