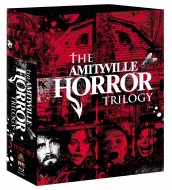 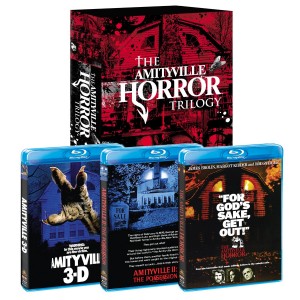 While films with the words AMITYVILLE in them have been floating around for over 30 years now, most of the direct-DVD releases that followed after 1983’s AMITYVILLE 3-D have been forgettable exercises in using brand recognition over quality storytelling.

Now Shout! Factory has released the first three AMITYVILLE movies in a solid Blu-ray set dubbed THE AMITYVILLE HORROR TRILOGY. Not only are they remastered, but they’re also filled with great new bonus features and remind us of their simple and scary charms.

First up is 1979’s THE AMITYVILLE HORROR (remade poorly mind you in 2005) and it’s based on the experiences of real-life George Lutz who bought the haunted property in Amityville hoping for a new lease on life for his family. Of course, strange and unexpected events started happening, as George starts to get angrier and almost possessed by the negative energy in the house. Their kid befriends an imaginary (or is it) spirit named Jody, and well, there are the flies that seem to show up whenever the Clergy enter the house.

Toss in bad accidents, a secret room in the house that may or may not be a portal to hell and other standard creepy haunted house stuff and you’ve got a solid scare fest that still holds on to its antiquated charms.

It’s far from perfect (the ending, staying true to the source is a bit of a cop-out, but it’s real, so you can’t knock it) and some of the acting is a bit over-the-top at times, but this Stuart Rosenberg film provides enough old school chills to still make it quite effective.

1982’s AMITYVILLE II: THE POSSESSION tried to extend the life of the franchise by digging into the story of the owners of the house before the Lutz’s – the DeFeo’s. Called the Montelli’s in the film (likely for legal reasons in the movie), this is technically a prequel, but this is where the film kind of goes batty with its logic and reasoning.

The poster proclaims this film is about what happened before the Lutz’s moved in which would be the early 1970s, yet THE POSSESSION plays fast and loose with its time period including the appearance of Walkman’s and modern cars (for 1982) which confuses the issue as to whether this is actually a prequel or sequel.

Whatever the case, director Damiano Damiani makes an incredibly creepy little film for the first hour. It’s disturbing, taut and suspenseful. It also pushes the boundaries of what you can do in a horror movie, even delving into an icky incest storyline and some spousal abuse. It’s all rather effective, culminating with a big event that is similar to what is public knowledge about the horrors that befell the DeFeo family.

Then the film takes another 30 minutes detour into a strange area and becomes a movie about the local priest Father Adamsky (James Olson) trying to save the oldest Montelli son Sonny (Jack Magner) from being tried for murder. He believes the boy is possessed and tries to find a way to free the evil spirit from him.

Illogically things follow which really ruin the momentum and tone of the earlier half of the film. Why they went in this direction is a mystery, but it really ruins an otherwise strong film. The movie also features some great special practical make-up effects – back when this special skill set was evolving with transformation effects.

Finally, 1983’s sequel AMITVILLE 3D was created, clearly, with the then 3D fad at the time in mind. It’s the least of the three, because it’s not only PG-rated, but it also feels cheap. There’s little style that was on display in the first two films, instead replaced by a workman-like directing style courtesy of Richard Fleischer.

The story follows exposé magazine reporter John Baxter (Tony Roberts) as he takes ownership of the Amityville house and starts to experience a real-life haunting.

The movie is notable for the appearances of Meg Ryan and Lori Loughlin in key roles as well as Candy Clark.

Both 2D and 3D versions of the movie are on the same disc.

Special features for THE AMITYVILLE HORROR include audio commentary from Hans Holzer whose book on the DeFeo’s was the seeds for AMITYVILLE II. James Brolin and Margot Kidder are also interviewed for a featurette. Both were previously released on the DVD box set. There are also the expected trailers and radio spots present.

AMITYVILLE II gets an interview with director Damiani and some fun new interviews with actors Andrew Prine, Diane Franklin and Rutanya Alda. Audio commentary is from Alexandra Holzer, the daughter of Hans Holzer.

Finally, AMITYVILLE 3-D is the skimpiest of the lot, featuring a theatrical trailer only, but as previously mentioned, it also has both the 2D and 3D versions of the movie on the same disc.

THE AMITYVILLE COLLECTION is a solid release, owing more to recent movies like THE CONJURING and INSIDIOUS both in its pacing and its successful use of scares over unnecessary gore. None of the films are exceptional, but they have stood the test of time and are a nice time capsule of the early late 1970s/early 1980s way of scaring the crap out of audiences.

Click on link to Purchase THE AMITYVILLE HORROR TRILOGY