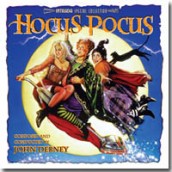 Among the spells cast by a company whose fan devotion borders on the scary, Disney’s HOCUS POCUS has bewitched a following easily big enough to form more than a few covens over the last 30 years. Following up his similarly cultish Mouse House musical NEWSIES with this supernatural kid’s comedy-thriller, director Kenny Ortega resurrected three Salem witches on Halloween night, with only a bunch of intrepid kids, a talking black cat and a zombie standing between these twisted sisters and world domination. But if these ladies weren’t exactly threatening (and far more devilishly hot in the broom-flying case of Sarah Jessica Parker), it was still necessary for the small fry audience to take the scares somewhat seriously. A big part of creating that particularly spooky-fun magic fell to composer John Debney, a Disney legacy artist who was building his rep through such youth-friendly projects as PIGGSBURG PIGS, JETSONS: THE MOVIE and A PUP NAMED SCOOBY DOO.  That HOCUS POCUS‘ resulting score would propel Debney into much bigger, and truly scary adult things like THE RELIC and END OF DAYS shows just how well he cast this movie’s bright musical black magic, whose wonderful melodic potency has only grown for Intrada’s anniversary edition.

All Hallow’s Even has been very good to Debney, right from his very first gig for  DISNEY’S HALLOWEEN TREAT to scoring THE HALLOWEEN TREE in 1993 – the same year as HOCUS POCUS. Debney has understood the real trick of how to approach these stories is the way to make the music scarily suspenseful for the kiddies, yet not too scary. HOCUS POCUS is an exemplar in symphonically balancing the light and the darkness, while also standing as the score that really showed Debney could soar into the major leagues. He’s got a wealth of memorable themes ranging from the warmly emotional to the rollickingly malefic, showing a talent for lush orchestral writing in the John Williams tradition. He’s bubbled and troubled with the maestro’s by using sparkling strings, bells, and haunted voices that make HOCUS POCUS a worthy cauldron-mate to Williams’ WITCHES OF EASTWICK. Debney also draws on the tradition of bewitched music, especially FANTASIA’s use of Paul Dukas’ “The Sorcerer’s Apprentice” (which famously had Mickey and a bunch of out of control broomsticks) to Modest Mussogorsky’s fearsome “Night On Bald Mountain.” Distilling these worthy ancestors into his own voice, Debney’s HOCUS POCUS is the swirling fairy tale embodiment of all that’s spooky, suspenseful and fun about the tradition of Halloween run amuck.

A great many fairy tales of HOCUS POCUS‘ sort (not to mention Disney movies) always revolve around its villains’ diabolical plans to do away with those pesky kids – plots which are usually put into deceptively sweet candy wrappers. One of the most deliciously charming examples for this particular studio remains Sarah Jessica Parker’s siren song of “Sarah’s Theme,” a chillingly beautiful call to the little children (written by original composer James Horner) to follow her into a land of enchantment that’s anything but. This vocal is but one of the many treats of Intrada’s sumptuous album that at last puts HOCUS POCUS understandably expensive promo into the far more affordable hands of this movie’s acolytes, especially the Debney fans yearning to get the ultimate edition of a score that understandably gave Debney the broom ride to the big leagues.

Clink on the link to Purchase HOCUS POCUS soundtrack