The executive producer also reveals Season 5 will be 20 episodes 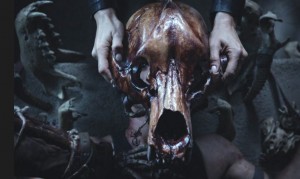 As TEEN WOLF wraps up Season 4 on MTV Monday night with an extended season finale, the series once again builds toward multiple story strands, potential deaths for beloved characters (or maybe not) and the continual evolution of Scott [Tyler Posey] becoming a true Alpha.

The finale finds Scott in Mexico about to become a Berserker, his friends valiantly searching for him, Peter Hale (Ian Bohen) wanting Scott dead and former Hunter turned werewolf Kate Argent (Jill Wagner) doing bad things for her own still unclear agenda. That’s only the tip of the iceberg of stories vying for air time.

To catch us up to speed, executive producer Jeff Davis (who also developed the show for television) discusses with AX what to expect on the finale and how complex it is to sustain one of the best genre TV shows currently on television.

ASSIGNMENT X: How difficult and how long does it take to plan a season long arc on Teen Wolf and make it interesting and different? Every year the show surprises with something different, but the The Benefactor/Dead Pool concept this year was amazing and something truly bizarre and different.

DAVIS: Plotting a season of TEEN WOLF is always a monumental task mostly because we try to be so ambitious with our storytelling. This season we actually had our shortest period of time ever between production cycles. We were essentially finishing the finale of 3B while desperately trying to figure out what to do for Season 4. We had all of six weeks to prepare for Season Four. Most other cable shows are used to periods of 18 to 26 weeks. The Dead Pool idea, however, was a way for us to up the stakes, to add in a rogues gallery of villains, and to show a different side to our main characters that reminded the audience that these people still struggle to live outside the supernatural, that they have bills to pay like everyone else.

AX: Was it harder than usual going into this season, especially knowing there would be the absence of Allison [Crystal Reed] – not to mention fans needing some adjustment to a show without her?

DAVIS: It was indeed. There was a great deal of cast turnover, so it felt in some ways as if we were rebooting the show. If I could do it differently, I would have put more time in between the seasons. Maybe waited until January to premiere again. But those are programming decisions, well above my job title, and done by very smart people at the network. 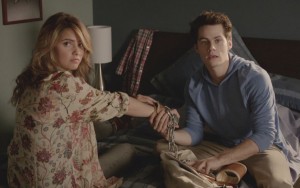 AX: It also seems like there’s been baby steps between Scott and Kira [Arden Cho] – are you trying to prolong the courtship as long as possible to avoid the inevitable “we’re together now TV scenario, now what do we do?”

DAVIS: We like to try different things with the romances on the show. Some are a slow burn. Others get right to it. We’ve been plotting Scott and Kira more like a romantic comedy. It was a way to differentiate them from Scott and Allison.

AX: Was it tougher doing 24 episodes last year and does 12 seem like the right number per season for this series?

DAVIS: Here’s the funny thing about our schedule, the way it worked out, it was actually more like we did 36 episodes. With only six weeks in-between production cycles, we found ourselves working harder than ever to put out this number of episodes. 12 is certainly a more manageable number, but what is most crucial is prep time. Having plenty of weeks before production for the writers to talk about the season mystery, the character arcs, for production to be able to build new sets and find great locations, to do story meetings with the directors and, most of all, to just have a break where we’re not simply churning out material. I’m amazed that my writing staff, directors, actors and crew did so well under the pressure and constraints. It’s a true testament to how good they are at their jobs.

AX: Would you ever do another 24-episode season?

DAVIS: Only with enough prep time. For Season 5, the network has graciously given us a 20-episode order with a break in-between blocks of 10 episodes.

AX: Will that be two different storylines or one story and will they split up?

DAVIS: Two, 10-episode blocks. We haven’t decided yet on whether those will be separate stories or one long arc.

AX: There seems to be so many plot strands to deal with in the season finale and only an hour to wrap it up. There’s Peter’s quest for Scott’s power, Kate [Jill Wagner] dealing with her werewolf issues, Malia [Shelley Henig] looking for her mom, Liam [Dylan Sprayberry] going through his own growing pains, and other things I haven’t even toughed on – will everything be tied up in a bow or will there still be loose ends left for Season 5?

DAVIS: Luckily the network gave us an extra eleven minutes for our season finale. It not only allows more story, but more time to let scenes breathe. We often feel the constraints of cutting down the episodes to time for broadcast. It’s not easy to do. Certain story points are merely set up for the future, like the search for Malia’s mother, The Desert Wolf.

AX: I loved the set up of the Dr. Valeck character [Stephen Brand] – a sort of supernatural Hannibal Lecter. The character seemed too cool to be a one-off. Is this a potential seed for what may lie ahead in Season 5?

DAVIS: He is a definitely a clue for what may be scene in the next season, but to be honest, we’d love to have Steven Brand back in this role because he’s just so good.

AX: Each season (and last year, half season) feels like it’s own unique season-long movie with Scott dealing with being the werewolf the center. What do you see as the ultimate Scott lesson for Season 4 and do you have a particular end game for where you want Scott to be by the time the series is over?

DAVIS: Season 4 is very specifically about how Scott can manage the monstrous side of his power while still retaining his humanity and morality. His greatest fear is that he’ll turn into the same kind of monster that Peter was in the first season. That he’ll kill someone, whether by necessity or by giving too much to his animal side. This is why, even as an Alpha, he doesn’t always win when he fights. He’s holding back. Afraid of giving in too much. In a way, it’s a little bit like how Palpatine goaded Luke with the Dark Side of the Force, telling him that only by giving into hatred and anger would he have the power to destroy his enemies.

AX: By the way, I love the new characters, but by far Malia has really broken out in a big way for me. Love her relationship with Stiles and her trying to find a way to fit in. Is there a bigger arc ahead for her in the near future?

DAVIS: There is definitely a bigger arc coming up for Malia. Shelley Hennig has been fantastic. She’s not only tough, but she’s terrific with comedy. We’ll be seeing more of her struggles with fitting in, catching up in academia and definitely more about her parents.

AX: How has shooting in Los Angeles changed the series and how you approach the writing? Has it made it easier. I’m sure sunny skies can be problematic all the time for a show heavy on atmospherics.

DAVIS: We actually don’t worry too much about sunny skies since there are so many night shoots. The greatest part about shooting in Los Angeles is being able to go home after work and not feeling like you’ve been uprooted. Our crew is also fantastic.

AX: Death always plays a big part in TEEN WOLF, with huge surprises every season. Will there be bloodshed in the season finale this year?